Here WEA tutor Mark Krantz tells us about an upcoming free learning experience he is leading at PHM.  Involving lots of discussion, peer learning, interaction, a gallery tour and an archive session this free, six week course has been funded by the Wellcome Trust to support public engagement and understanding of science.

From Brewers to Sewers

‘We are living longer lives than ever; scientific discoveries, new medicines and better nutrition have all had a significant effect.  Many dangerous diseases have been eradicated, but we face new challenges to achieving good health and the National Health Service (NHS) is facing a severe crisis.  This course will look at the past in order to shine a light on the problem we face today.  Here I share some of the issues concerning public health that are addressed on the course for PHM which I will lead using a mixture of presentations, videos, handouts, and discussions, using PHM’s collections.

The remains of 20,000 people lie buried under the grounds of St John’s Church located just a few hundred yards from the museum.  All died after being struck down by the plague that spread throughout Europe in the 14th century.  A third of the population in England was killed from what we now know was the lethal bacteria, Yersinia pestis, spread by rodents such as rats.  Some people carried garlic and onions hoping for protection.  There was none.

One hundred years ago it was a different germ that spread across the world killing people.  More were killed by germs than were killed by all the bullets and bombs in the battles of World War I.  Influenza, or Spanish Flu as it was called, killed between 50 and 100 million people; two thirds in a single ten week period in the autumn of 1918.  To halt the spread of the killer disease a mask was worn to cover the mouth.  This mask offered no protection at all, we now know, the virus responsible is spread by breathing in infected particles that enter the body through the skin inside the nose.

Over two centuries there have been massive advancements in science, medicine, and in public health that have led to a greater understanding of health and the eradication of many once lethal and contagious diseases.  Penicillin, immunisation, antibiotics have saved and transformed millions of lives.  However, the over use and reliance on antibiotics has now led to the evolution of strains that are resistant to drugs.  Some epidemiologists warn of a new strain of killer virus that could spread once more across the world.

The course includes a visit to PHM’s Labour History Archive & Study Centre to examine photographs of housing conditions, and original documents regarding the establishment of the NHS.

In Salford and Manchester in the 1840s people lived in overcrowded back to back tenements.  Hundreds shared a single toilet.  The sewage flowed down the middle of the street and cholera and other diseases spread rapidly.

The job of the Night Soil Man was to collect human waste and take it in barrels to Davyhulme Sewage Works, a village just outside of Manchester.  It was the main waste water treatment works for the city, and one of the largest in Europe.

The night soil was spread on the bare land and the sun’s rays would eventually break down the waste at the sewage farm.  This process was improved on and then replaced with development of filtration beds.

A new activated sludge process for sewage treatment was developed at the Davyhulme Sewage Works in 1913.  It is now the standard method used in sewage works across the world.  Today thermal hydrolysis is the latest technology used at the plant.  Separated waste solids are put in a huge pressure cooker; heat exchange produces methane used as fuel to make the electricity that runs the entire plant; the residue is a ‘cake’ that is given to farmers to spread on fields to improve fertility and soil structure.  This new plant can be seen by car if you drive over the M60 Barton Bridge.

During the course a visiting speaker from the Davyhulme Sewage Works will explore this development.

Motor vehicle accidents used to be the most common cause of death for men and for women in the 15 to 40 years’ age group.  Cars used to kill more people than cancer.

In 1966 the American political activist Ralph Nader wrote his book, Unsafe at Any Speed which revealed that the US car manufacturers had developed adaptations that they knew would make their cars safer – but they did not install these life saving measures.  Car sales were promoted through advertising a fast and sexy image and safety from being killed did not fit that image.  After Nader spoke out the campaign for safer cars grew, the manufacturers were forced to make changes, cars were made much safer.  With the introduction of safe glass windshields, seat belts, air bags, and then legislation for manufacturers, drivers and passengers, today’s cars have never been safer.

But invisible, toxic emissions from cars, lorries and busses are at record and dangerous levels.  Today toxic exhaust fumes kill people, children’s lung development is stunted, and asthma is becoming more common.  Some of the highest concentration of nitrogen dioxide (NO2) have been measured in inner city Manchester.

Along with great advancements in public health, we are today seeing a return of health problems that once were thought to have been solved.’

Please note attendees are required to book onto all six weeks of the course.

A WEA course funded by the Wellcome Trust in association with the People’s History Museum. 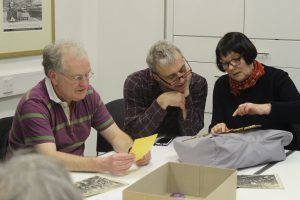 ‘Really enjoyed the discussions.  Learnt so much about the basics of public health.  Pleased the course was free.  Excellent tutor who engages so well with the students.’

‘Learnt a lot about the history of public health and the reasons that influenced how it was developed.  Also interesting to hear the experiences of course members.’

‘The course was well constructed and tutor encouraged participation through discussion and varied activities.  It was particularly good that the course was free and it enabled some people to attend who may not have been able to pay.  Thanks to WEA, Wellcome Trust and PHM for making this possible.’

‘The tutor provided excellent resources which provoked learning, discussion and debate.  His skilful handling of a large group of opinionated ‘life experienced’ participants was exemplary.  I learned, as a result from Mark but also from other members of the course.  It was a good experience.’