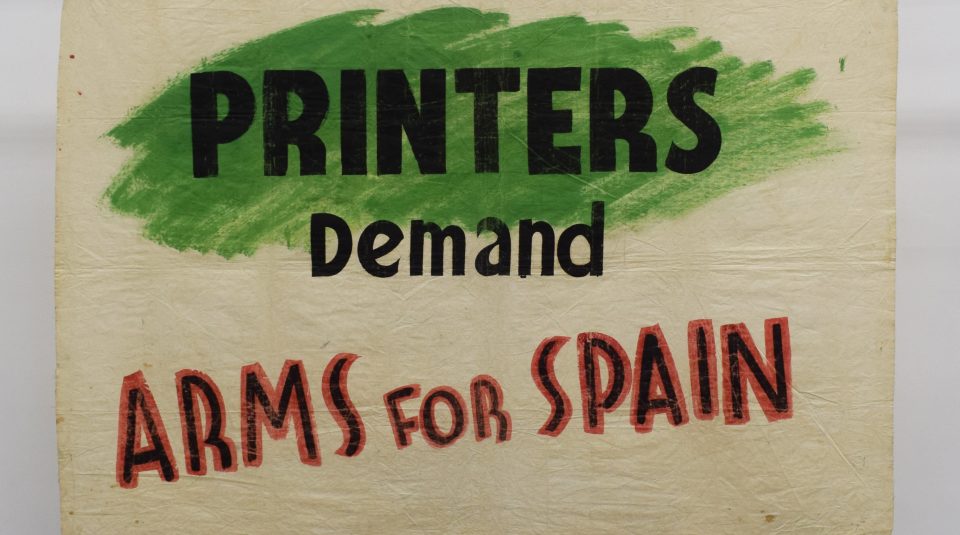 ‘‘We protest with all our power against the sham, the hypocritical sham, that it now appears to be.’

Speaking in the House of Commons on 19 October 1936, the politician Philip Noel-Baker blasted the conservative government for advocating non-intervention in the Spanish Civil War, which had erupted that same year.  This notion of protest, not only against the nationalist Francisco Franco and his forces in Spain, but against the staunch non-intervention motives of the government, became unanimous with the leftwing of Britain.  For example, Kenneth Sinclair-Loutit, a doctor who had treated casualties in the war, completely disregarded a threat of disinheritance from his father and volunteered anyway.

The Labour Party had originally supported the government’s non-intervention, but when Adolf Hitler and Benito Mussolini’s support for Franco was publicised, Labour leaders began to call for Britain to supply the Popular Front with military aid.  Some members of the party joined the International Brigades, although some of the more leftwing like Bob Edwards were part of the Independent Labour Party contingent.  Of the 2,000 British citizens who served with the Spanish Republican Army though, the majority were members of the Communist Party of Great Britain (CPGB).

Although some notable literary figures volunteered, such as W H Auden, John Cornford, Stephen Spender, Christopher Caudwell and George Orwell, most of the men who went to Spain were working class, including many unemployed miners.  The majority of those who were moved to join and fight the war were not motivated by a privileged desire for rebellion, although several of the more notable names undoubtedly were.  They were moved by the desire for genuine protest against the threat of fascism, a reality which would crush the working class.

One man who certainly joined the fighting in protest of Franco’s nationalist ideals was Bob Edwards.  On the outbreak of the Spanish Civil War, Edwards asked members of the Independent Labour Party (ILP) to volunteer to join the International Brigades.  Stafford Cottman was one of the men who offered his services, recalling ‘I was asked to go along to their headquarters, and I met Bob Edwards who was its leader.  At the headquarters we were all interviewed by Bob and a couple of others.  They asked you simple things like why you wanted to go to Spain.  The idea was to find out whether you did have a sort of principle or whether it was pure adventure’.

The effect that the war had on the future for Edwards and his political career is obvious. While some left Spain disillusioned, Edwards returned radical.  Years later he travelled to Spain again, protesting the imprisonment of political prisoners and distributing pamphlets pleading their case.  Originally under the guise of going on holiday, Edwards was questioned for ten hours by what he later called ‘Franco’s Gestapo’.  A risky holiday indeed, considering the death sentence he was issued in 1939 should he ever return to Spain.

The British Independent Labour Party also sent a small contingent to fight in the Spanish Civil War.  The contingent fought alongside the Workers’ Party of Marxist Unification (POUM) and included George Orwell, who wrote about his experiences in his personal account Homage to Catalonia.  Orwell was also comrade to Edwards; whose relationship was a frosty one indeed.  Orwell was not popular among fellow British militiamen either, who resented his ‘cut-glass Eton accent’.

One said he disliked this ‘supercilious bastard’ who ‘really didn’t like the workers’.  Even the exiled Spanish Republican Prime Minister, Dr Juan Negrin, described Orwell’s approach to the conflict and his book Homage to Catalonia as ‘idealistic and unworldly’.  The war had, in the years after it, affected comrades Edwards and Orwell in very different ways.  Orwell was disillusioned and depressed.  The result, said a sympathetic biographer, of ‘his recognition that there was no more that he could do in Spain’.

The fighting, which rumbled on from 1936 to 1939, wasn’t the only conflict going on in Spain. Indeed, the relationship between comrades Edwards and Orwell was a very heated one. Famously blasting Orwell, Edwards claimed this ‘bloody scribbler’ had ‘no actual experience of the working class struggle’ as a ‘journalist observer’.  The MP went on to claim that Orwell was attempting to stir up more conflict, looking for ‘material for the book he was writing on Spain’.  Cutting comments for Orwell no doubt, who was writing his Homage to Catalonia at the time.

These two photographs discovered and put on display in the archives tell a different story, though.  They capture a rare moment of Edwards and Orwell between arguing.  The photographs, assumed to have been taken on Orwell’s personal camera, aren’t posed and have no military connotations.  Instead, they show the men taking time for themselves – relaxing, eating and laughing.  It is these candid moments, such is with any conflict, that humanise those involved.

The enduring effects that fighting the Spanish Civil War had not only for Bob Edwards and George Orwell, but for the rest of society, are great.  Without the sour taste in his mouth from Stalinism during the conflict, George Orwell might not have felt strongly enough to write Animal Farm or 1984.  These works have undoubtedly influenced and inspired literature throughout history and no doubt will continue to do so long into the future.  Orwell was, of course, nearly assassinated by Stalinists in the hotel room he shared with his wife in the immediate aftermath of the war.

The Spanish Civil War display is on show in the archives until the end of August 2019.  The collection will be available for researchers after this time.  The archive is open Monday to Friday 10.00am – 5.00pm, lunchtime closure 12.30pm – 1.30pm.  Please make an appointment prior to your visit by contacting the Archive Team on archive@phm.org.uk or 0161 838 9190.

2019 Banner Display until Sunday 5 January 2020
The majority of banners on display at PHM change annually, revamping a quarter of the museum’s main galleries.  Visit 2019’s selection of historic and contemporary banners – some on public display for the first time, all specially conserved by the museum’s expert Conservation Team

The museum’s internationally significant collection includes items of national importance from the last 250 years of British social and political history.  PHM’s archive is home to the complete holdings of the national Labour Party and Communist Party of Great Britain and over 95,000 photographs relating to the growth of democracy in Britain, covering not only parliamentary reform, extension of the vote and general elections, but grassroots organisations and campaigns also.