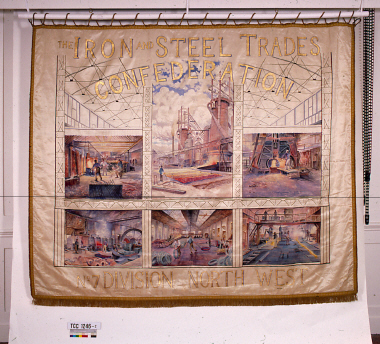 Description
The union was founded in 1915.

The design was commissioned by the ISTC in 1919. The artist employed was Herbert J Finn, who had exhibited at the Royal Academy in 1901. Finn worked up his designs from paintings and drawings which he did on tour of iron and steel plants. He painted a total of seven banners for the ISTC, one for each division of the union.

Technology, spurred on by World War One, was growing. Unlike other banner designers, Finn does not hark back to an earlier machine-free arcadia, nor are there any slogans or exhortations to unity.

The banner was conserved at the Textile Conservation Studio, Hampton Court in 1989.