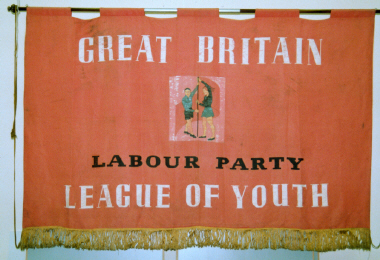 The Labour Party League of Youth (LoY) was formed in 1924 and ran through to 1955, disbanding briefly during World War II.

The LoY aimed to recruit young people aged 16 to 25 and educate them in socialism and labour politics. The LoY also held social events such as dances and summer camps, and ran a variety of clubs and sport groups.

Our research suggests that this banner may have been the LoY's national banner, which was awarded annually to the regional branch thought to have made the biggest contribution to the progress of the LoY and the Labour movement.