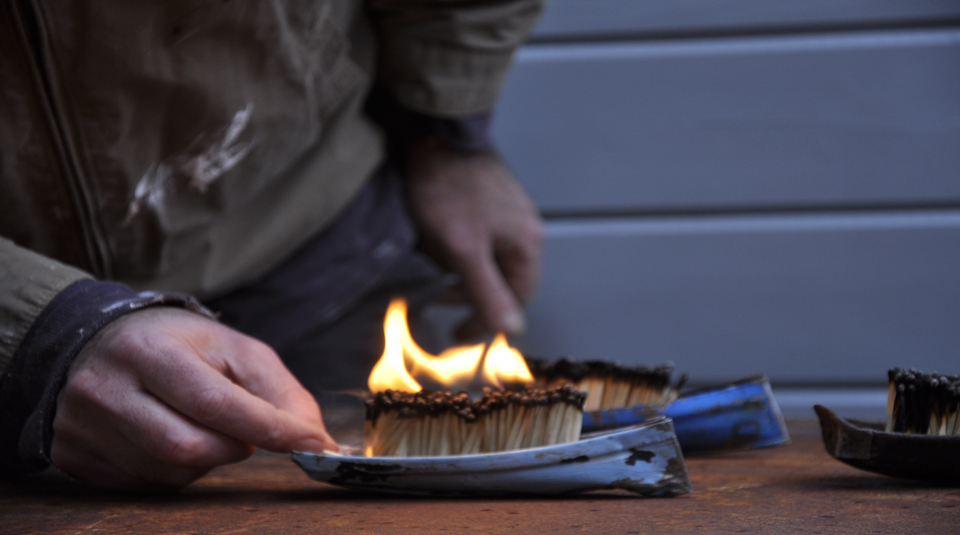 you have to understand,
that no one puts their children in a boat
unless the water is safer than the land
Warsan Shire, poet

Join us for a Radical Late evening exploring the themes of the British Museum’s Spotlight Loan Crossings: community and refuge, on display at PHM from Saturday 29 May to Sunday 5 September 2021.

The evening includes a talk from Syrian artist Issam Kourbaj about his work Dark Water, Burning World.  The miniature boats from this installation are made from repurposed bicycle mudguards, jam-packed with upright, extinguished matchsticks to evoke the plight of his fellow Syrians for whom the sea held less terror than the land.

Alongside Issam’s talk, guitarist and songwriter Ewan McLennan will perform a collection of his songs.  Ewan’s performance will include his song Lampedusa, the title of which comes from the Italian island in the Mediterranean Sea which has become the primary entry point for many refugees escaping countries torn apart by violence and war.

Supported by the Dorset Foundation in memory of Harry M Weinrebe.

Suitable for ages 16+ (under 18s must have accompanying adult).

Please note this event contains images and descriptions of traumatic migration experiences that some visitors may find distressing.

Since 1990, he has lived and worked in Cambridge, where he has been artist-in-residence, a Bye-Fellow (2007–2011) and a lecturer in Art, at Christ’s College at the University of Cambridge.  His work has been widely exhibited and collected; most recently by an addition to the Pergamon Museum, Berlin.

Since 2011, Kourbaj has been dedicated to raising awareness and money for projects and aid in Syria through several exhibitions, installations and performances in the UK and abroad.

Ewan McLennan
From a BBC Folk Award to his work with Transatlantic Sessions through to his recent critically acclaimed collaboration with the author George Monbiot, Ewan McLennan has come to be known as one of the finest troubadours, singer-songwriters and balladeers of his generation.

Whether singing self-penned works that speak to our modern times, centuries old traditional ballads, or drinking songs, his intimate and moving performances are renowned for their ability to weave narratives that span centuries and continents.

As well as some of the favourites from his previous albums, this solo performance will feature tracks from his forthcoming album Borrowed Songs – with works that touch on issues from Windrush to the loss of our natural world, as well as traditional shanties, lullabies and ballads.