Event | Not trying to cause a big sensation? 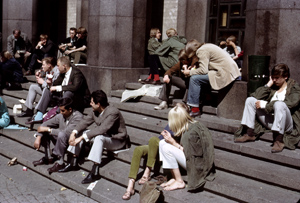 In recent years, politicians, policy-makers and journalists have lamented young people’s disengagement from politics as turnout levels among 18 to 24 year olds dropped to 43% in the 2015 general election.  In 2017, however, voting rates climbed sharply as the Labour Party campaign energised young people, and the issues of housing, university fees and generational inequality rose up the political agenda.

British politics is now more polarised by age than ever.  How are we to understand these patterns? Are young people more or less politically engaged than in the past?  Is the younger generation less idealistic, and more worried about material concerns, than earlier cohorts?

50 years after the Labour government announced its intention to lower the voting age to 18, this public talk will discuss these questions from a historical perspective.  Professor Adrian Bingham and Dr Tom Dowling from the University of Sheffield will draw on evidence from the Conservative Party and Labour Party archives, historical polling data, social science surveys, and life writing, to outline some of the main trends in young people’s political participation.

Lisa Nandy, MP for Wigan, and Liam Young, journalist and author of Rise: How Jeremy Corbyn Inspired the Young to Create a New Socialism, will offer their insider views of how young people are changing politics.

Suitable for adults and young people.

For further information please contact the museum on 0161 838 9190 or email events@phm.org.uk