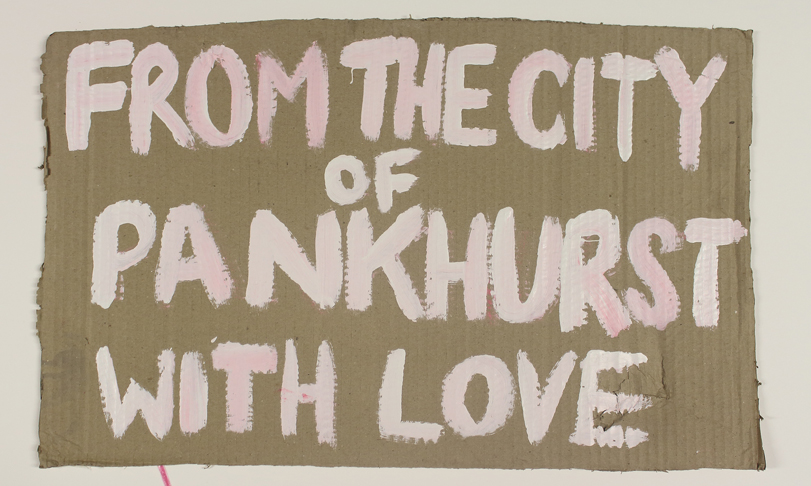 On 6 February 1918, the Representation of the People Act was passed, giving most men and some women in Britain the vote.  This would change the lives of many working men and women, who finally had a say over who represented them in parliament.

Represent! Voices 100 Years On reflects on those who campaigned for better representation; most famously the suffragists and the militant suffragettes.  Acquired by the museum in 2017, the Manchester suffragette banner is on display for the first time in the exhibition, alongside sashes, brooches, photographs and cartoons, helping to paint a picture of what representation meant in 1918.

This Family Friendly exhibition also questions how far we have really come in 100 years?  It gives a platform to individuals and communities, including LGBT+ youth charity The Proud Trust and Safety4Sisters, who are still fighting to make their voices heard today.  Crowdsourced items, including placards from the 2017 Women’s Marches and a jumpsuit from the Sisters Uncut 2018 BAFTA protest, tell the very personal stories of today’s movements and campaigns.

Represent! Voices 100 Years On takes its inspiration from feminist zines and has been designed in collaboration with Riposte magazine.

Part of our year long programme exploring the past, present and future of representation, marking 100 years since the passing of the Representation of the People Act (1918) and since all men

and some women won the right to vote in Britain.

Take a virtual tour of the exhibition, which ended on Sunday 3 February 2019.

Download and listen to PHM’s podcast series exploring the key stories and objects behind the crowdsourced exhibition Represent! Voices 100 Years On. In this six part series, we reflect on those who campaigned for better representation; most famously the suffragists and the militant suffragettes.  We explore what it means to vote and how else you can make your voice heard.  We ask is it ever acceptable to break the law in protest?  And how far have we really come in 100 years?

Presented by Programme Officer and suffrage expert Helen Antrobus, the podcast series covers a section of the exhibition in each episode, exploring key objects and archives in depth.

This podcast series is part of PHM’s 2018 programme exploring the past, present and future of representation, marking 100 years since the passing of the Representation of the People Act (1918) and since all men and some women won the right to vote in Britain. 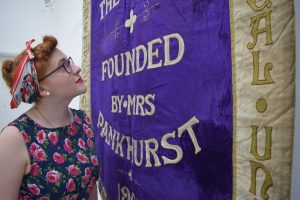 In this first episode, Helen Antrobus examines the importance of the Representation of the People Act (1918) in the history of British democracy and the fight for equality.

In this bumper episode, PHM Conservator Kloe Rumsey joins Helen as they uncover the stories behind amazing objects on display in the Represent! Voices 100 Years On exhibition including the 1908 Manchester suffragette banner, a 1906 Labour Party photograph and a 1926 Margaret Ashton portrait. This second episode examines parliament today.  It asks how representative parliament really is and what has changed since the election of the first female MP in 1918.  In this episode, Helen studies a 1929 general election poster, the first in which women could vote on an equal basis to men.  She explores why some people do not use their vote in 2018 and discusses campaigns like Bite the Ballot that promote democratic engagement.  She also highlights how women in power have been treated and scrutinised from Ellen Wilkinson first elected in 1924 to sitting (in 2018) MP Diane Abbott.

The third episode focusses on the ways people make their voices heard beyond the ballot box.  In this episode, Helen particularly focusses on marching as a form of protest; from the 1913 Suffragist Pilgrimage for women’s voting rights to the 2017 worldwide protest the Women’s March protesting against the inauguration of USA President Donald Trump.  As well as placards collected by PHM following the Manchester Women’s March, Helen explores key items of protest on display in the Represent! Voices 100 Years On exhibition including a banner from the 1936 Jarrow March. 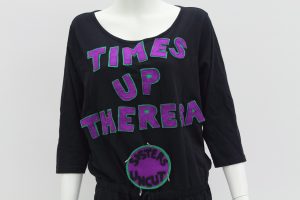 In this fourth episode, Helen Antrobus reflects on the legacy of the suffragettes who broke the law in protest at women being denied the right to vote. In particular, she explores the experiences of working class suffragette, Selina Martin, whose hunger strike medal and personal letters are displayed in the Represent! Voices 100 Years On exhibition Helen also explores objects from recent protests, including a jumpsuit from the Sisters Uncut 2018 BAFTA protest and an armband worn as a symbol of solidarity with hunger strikers at the Yarl’s Wood Immigration Removal Centre. The episode closes with the question, if the law is wrong should you break it? 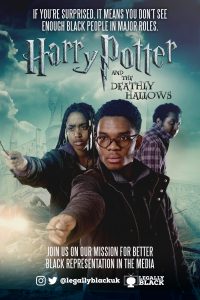 The fifth episode looks at the role of the media in representing and misrepresenting individuals and communities. Historically the suffrage campaigners understood the role of media in raising the profile of their campaigns. In this episode, Helen Antrobus examines both pro and anti women’s suffrage cartoons and newspapers and reflects on the tragic death of suffragette Emily Wilding Davidson, who was fatally injured by the King’s horse at Epsom Derby in June 1913. Helen also looks at recent campaigns including the 2018 poster campaign by Legally Black, which showed black people in major cinematic roles, to support the fight for better black representation in the media. 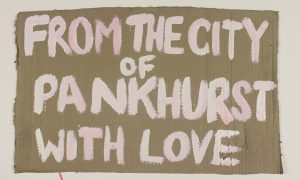 In this final episode, Helen Antrobus reflects on the activists of a century ago and compares them to activists fighting today. She asks how far have we come in 100 years and how far do we still have to go? Helen questions what it means to be a feminist today and explores the popularity of items such as t-shirts made by the Fawcett Society emblazoned with the phrase, ‘This is what a feminist looks like’. Helen explores contemporary campaigns such as the campaign to Repeal the Eighth Amendment, that would allow the government of Ireland to legislate for abortion – a campaign that unfolded as the Represent! Voices 100 Years On exhibition was being installed. Finally, she signs off the series with the words from a placard carried during the Women’s March Manchester 2017, ‘From the City of Pankhurst with Love’.