PHM’s Playwright in Residence Blog 2 of 3 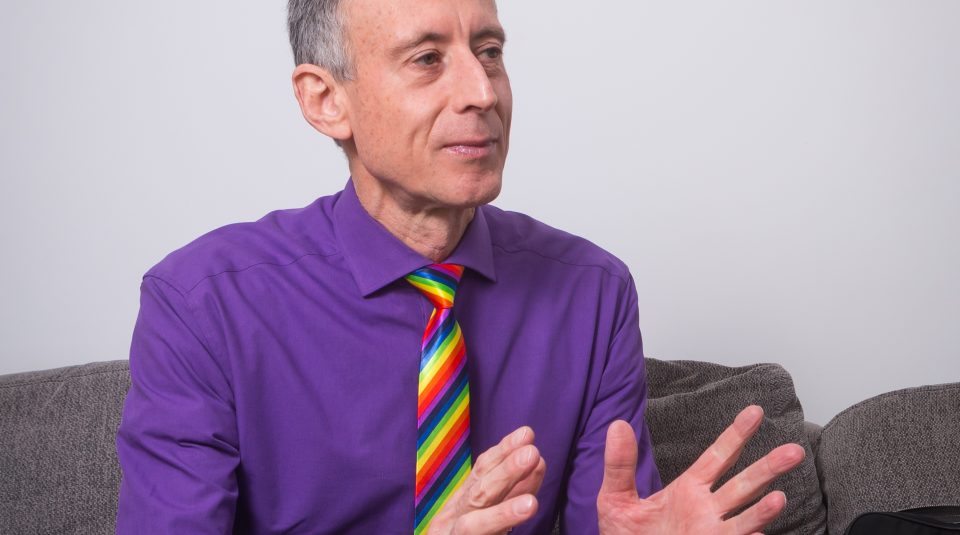 First Rumours is given a first rehearsed reading at PHM on Sunday 10 February 2019 at 3.00pm.  The reading will be followed by a Q&A with Peter Tatchell, facilitated by LGBT activist and historian Paul Fairweather.  Booking essential.

Stephen undertook several lengthy interviews with Peter to write the play and this second blog is about a moment where it went a little wrong in the first of those interviews.

Mr Tatchell discovers he is gay

‘It’s a rainy Sunday afternoon in October 2018.  The kind of day when even the midday light is a grey puddle and any Harry Potter movie and the sofa beckon.  Instead, I’ve gone to London to do my first interview with Peter Tatchell.  I write history plays, often about queer men, usually dead queer men who have been forgotten, or cast as asexual or even wilfully straight-washed.

Given that Peter is very much alive and kicking, it seems daft not to take the opportunity to speak to him.  He is so busy that it’s taken about a year to get some slots in his diary, and even then those are Sunday afternoons, when most people would be resting… perhaps watching Harry Potter movies on their sofa.

Peter isn’t.  He’s been up since 6.00am giving scores of media interviews about the Supreme Court ruling unanimously in favour of the right of some bakers in Northern Ireland not to make a cake with a pro-equal marriage slogan on it.  Peter supports their right not to make the cake, which is controversial but consistent with his principles.  It’s also generated a heap of interview requests.  It would be fair to say he’s already been interview blasted by the time I arrive, and he’s got three hours more of it with me.

I used to interview people for a living.  Not as a journalist, but as a Probation Officer.  My training was always to build rapport with the person you were interviewing and to be nosey about their background.  I realise this has probably formed a subconscious template for my interview with Peter as he suddenly detaches from answering my questions, bristles and says, ‘I’m just conscious, we haven’t got to Bermondsey yet and it’s getting on for half past three.’  I’m a bit taken aback.  We’re half way through the first of three interviews and I thought I was pacing it well.  He softens, ‘If you need all this, that’s fine, you know.’  I’m a bit thrown.  Do I need all this?  I’m not sure.  Should I just be sticking strictly to asking questions about 1983 and Bermondsey?

Whatever the right approach would’ve been, I have got Peter talking about something I think is very important in understanding who he is in 1983, or even who he is now; his first relationship.  Peter grew up in Melbourne, Australia in a working class family:

‘My passion was art and design.  Since my parent couldn’t afford to send me to art college or university, I had to figure out a way of getting into that profession without any qualifications.  So, I hit on the idea of working for a big department store where I could start as a junior and learn on the job.’

Peter started work for the prestigious Waltons department store just as he turned 17, learning signwriting, interior design and display.  His career blossomed.  But Walton’s did more than provide a positive practical environment for Peter to express his considerable creative talent.  The displays team consisted of ten staff, and four of them were gay.

Peter identifies himself as straight at this point.  He had had girlfriends at school, but had never slept with any of them.  Having had a conservative Christian upbringing, he had been taught that sex outside of marriage was sinful, and observed the prohibition.  However, Peter had caught the eye of one of the team, who asked him the same thing at the end of every day for months, ‘Are you coming home to dinner tonight?’  Then one night, Peter found himself saying yes.

After a slightly heart-stopping moment when his mother spotted the two of them at the tram, Peter had sex for the first time:

‘That was truly amazing sexually and emotionally.  It felt totally normal, totally natural, totally me… I never had a moment’s doubt after that first sexual experience.  I thought to myself religion has got it wrong… These proscriptions in the Bible are intended to protect people from harm, but what we’d done had caused no one any harm.  It’s a mistake or a mistranslation, whatever the explanation is because quite clearly there is nothing wrong with being gay.’

What followed was a two-and-a-half year romantic relationship which tuned into a deep friendship that exists to this day.  Peter’s first love was a happy and positive one and this affirmative attitude to gay sex and sexuality and his own identity is what he brings with him when he emigrates to the UK in 1971.  The experience of the Bermondsey by-election was pretty much the opposite, in every possible sense, to one he had at Waltons.’

Stephen’s play about Peter Tatchell, First Rumours, will be given a first rehearsed reading at People’s History Museum on Sunday 10 February 2019 at 3.00pm as part of OUTing the Past, the national festival of LGBT history, and the museum’s 2019 programme exploring the past, present and future of protest.  The reading will be followed by a Q&A with Peter Tatchell, facilitated by LGBT activist and historian Paul Fairweather.  Booking essential.

Stephen’s work began with a detailed study of the Labour Party archives, the complete holdings of which are held at PHM, which also holds some of the personal papers of Peter Tatchell. The project is supported by the Arts and Humanities Research Council (AHRC) and the University of Salford. 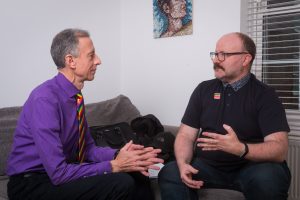 You can find out more about Stephen’s other work here: