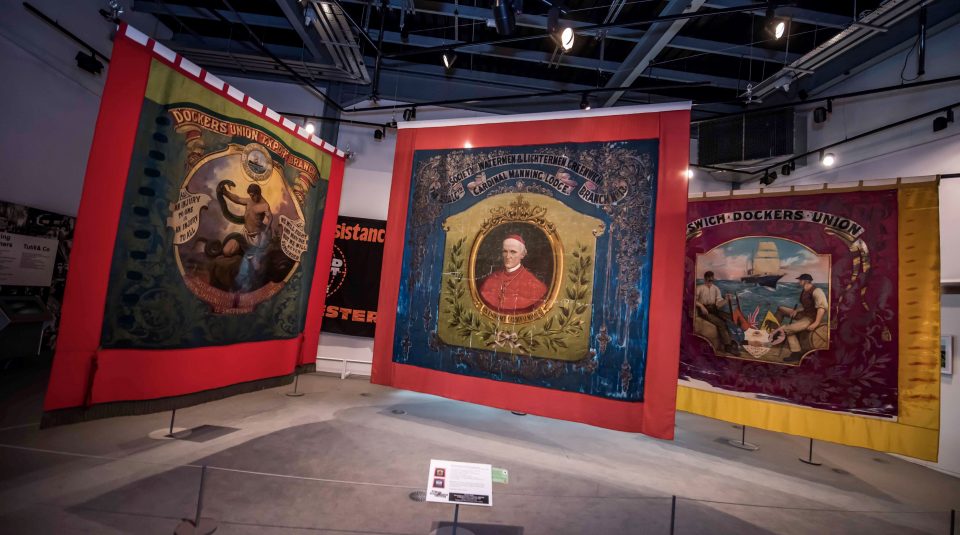 At our museum we are incredibly lucky to house the world’s largest collection of trade union and political banners.  In this month’s blog, our Conservator, Jenny van Enckevort explains the painstaking work it took to prepare one of our largest for the 2019 Banner Exhibition.

Conserving the Cardinal: preparing a banner for display

‘How are banners conserved for display?

The majority of banners on display at People’s History Museum’s (PHM) change annually, enabling the team to rotate the banners on open display and curate the display in line with the museum’s programme theme for each year.  Many of banners are displayed free hung so visitors can experience them as they were originally used. This approach means we are able to display both sides of our large banners but often leads to a more interventive form of treatment.  And 20 years after entering PHM’s collection one of the largest banners in the collection was requested for display.  This offered me the opportunity to re-visit the treatment and make it stable enough to display for a limited time.

Which is the largest banner in the collection?

A highlight of the 2019 Banner Display at PHM is the Amalgamated Society of Watermen & Lightermen Greenwich Branch No13 Cardinal Manning Lodge banner and at 358 cm x 332 cm it is one of our largest banners.  Alongside many of the banners in the collection this banner is featured in John Gorman’s 1973 publication Banner Bright: An Illustrated History of Trade Union Banners.  In it Gorman refers to the re-discovery of this banner,

‘The first box contained a banner wrapped in mildewed canvas sheets. I unrolled the banner onto the floor of the studio but it was difficult to discern the nature of the design since it was covered by a patina. I began to clean the banner with a solution of turps and linseed oil.  It was like the restoration of an old oil painting as colours and form began to emerge. The picture was of a cardinal in scarlet robes and skull cap, the last subject I had expected to find on a trade union banner.’

We think the banner was made in the 1890s to pay tribute to Cardinal Manning who mediated in the Great Dock Strike of 1889. This was a turning point in the labour movement which resulted in the growth of unions representing less skilled, lower paid workers.  Manning was respected on both sides and particularly revered by the Irish Catholic workers.  Despite this he was a divisive figure having begun his clerical career in the Church of England before converting to Catholicism.  In church matters he was conservative but his views on labour and the working conditions for the poor, as well as animal rights, were quite in line with modern left wing politics. 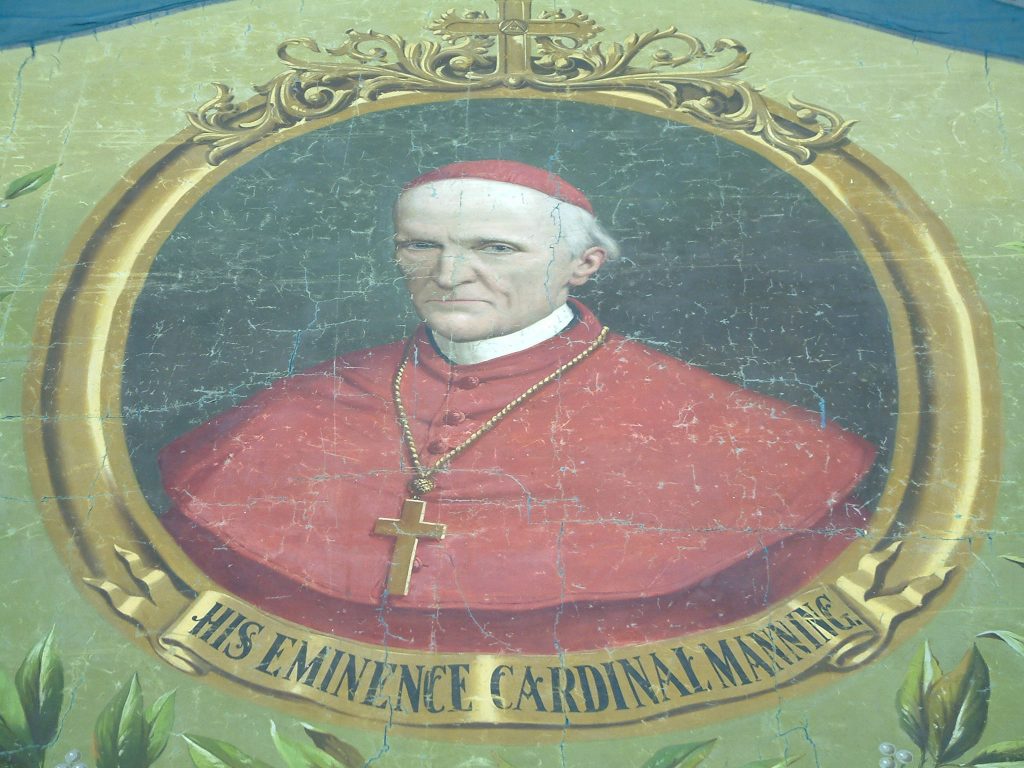 The banner features a portrait of Manning, in his cardinal robes, on one side and a scene of the River Thames at Greenwich on the opposite side.  The lightermen used barges to transfer goods from larger ships to the docks, and traditionally powered only by log oars called sweeps.  The watermen carried passengers from ship to shore.

What are banners made of?

Like many of the banners in the collection this banner is made from a single layer of silk, in this case blue, with an oil painting on both sides.  It is also trimmed with red silk borders; these are not original.  Although the banner is not signed we think it was made by a company called Kenning & Son. Their distinctive style featuring decorative scrolling vines in metallic paints above and around the central painted panel is evident.

How is a banner conserved?

When conserving a banner various proposals are considered to find a compromise between historic conservation and modern intervention.  We know that this banner was conserved at least twice before it came to our museum; each time returning to the Transport and General Workers Union.  It is thought that successive interventions, unfavourable display and storage conditions during this time contributed to the deterioration of the original materials.  When the banner was assessed at PHM it was noticed that areas of the adhesive film had failed and the heavy oil painted central panel was no longer adequately supported.

The conservation was challenging because it had to take into account the previous treatments and the interventions which now form part of the history of the banner and have impacted on its current condition.  The banner has suffered vertical and horizontal splits through the main painted panel, probably from being folded at some point in time.  The silk background fabric is faded, fragile and powdery, damage associated with prolonged light exposure.  The reverse side of the painted panel was also covered in dark blue silk which somewhat obscured the detail of the image. 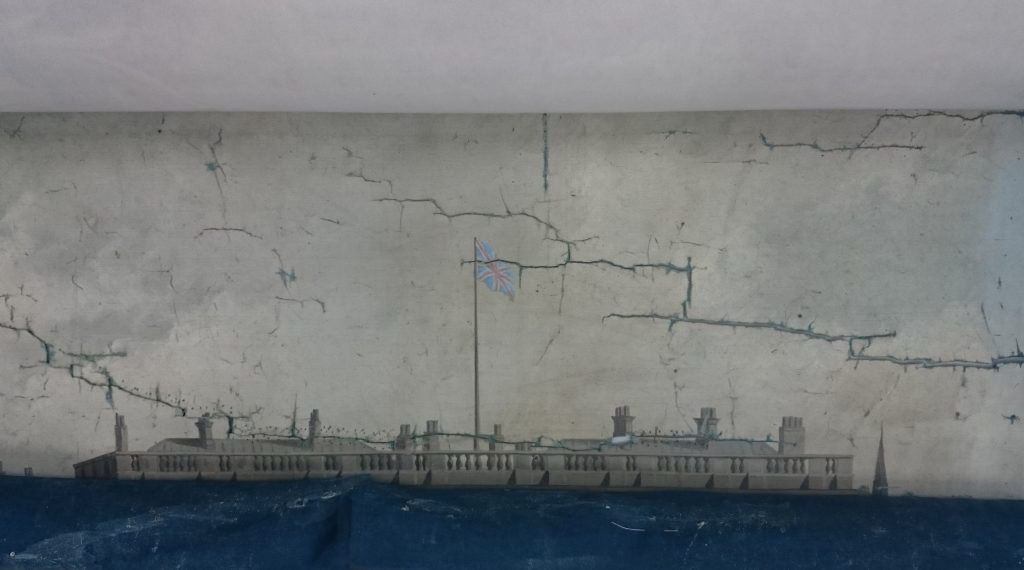 The old adhesive support covering the reverse side of the painted panel was cut away and the banner was cleaned on both sides with a tiny vacuum which enables us to pick up fine dust and debris from the surface of the textile. 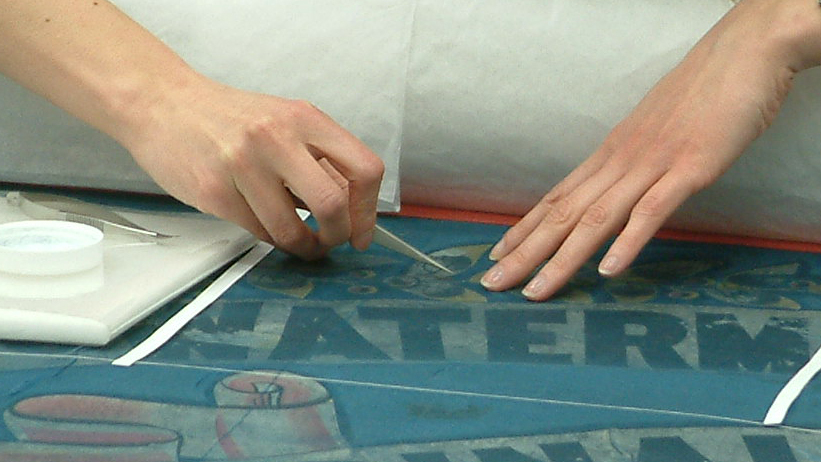 A new sheer silk support was dyed in a more complementary colour, this was then cast with a stronger adhesive to take the weight of the panel and adequately support the large tears. Once dry the silk was trimmed into three strips, intended to run vertically down the banner, with a small overlap on each side.  I used a small heated spatula to re-activate the adhesive once it is in position, this is a more controlled way of working than using wet adhesive in direct contact with the object.  It is worth noting that the blue silk, covering the original silk background fabric, was retained as it was thought that removal of this would further compromise the strength of the banner.

When working with such a large banner as conservators, we have to roll them onto a cardboard tube as we work to enable us to reach the centre, this is also how we handle the banners to move them around for photography and display.

The final conservation solution delivered the required level of support while retaining elements of previous treatment.  And once complete, a cotton sleeve was sewn to the top edge to provide even support for hanging and it was then ready for display.  This banner was one of the big three next to The Conservation Studio in Main Gallery Two in the 2019 Banner Exhibition.’

Until Sunday 8 January 2023
Come along to the 2022 Banner Exhibition, and browse two floors of galleries – with the banners interspersed throughout – as well as a unique viewing window into the specialist Conservation Studio.