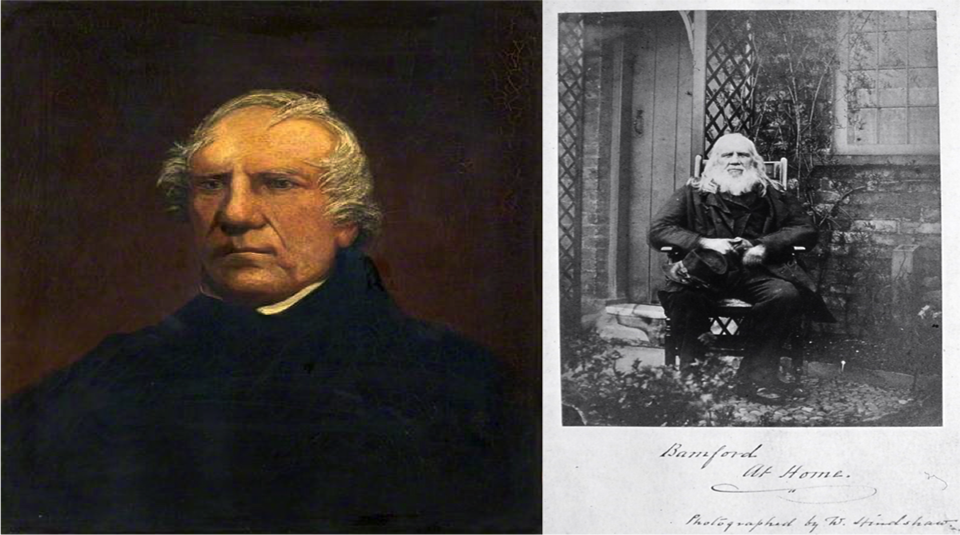 As we approach the anniversary of the Peterloo Massacre next weekend, Robert Poole, Historian and Professor of History at the University of Central Lancashire (UCLan), reflects on why he chose to be PHM Radical Sponsor of Samuel Bamford, radical reformer and writer who was present at Peterloo.

Who was Samuel Bamford?

My radical hero is Samuel Bamford (1788-1872), reformer, writer, journalist, poet, diarist, and hero of Peterloo.  He is also the best documented working man of the 19th century.

Bamford led the march from Rochdale and Middleton to St Peter’s Field, Manchester on 16 August 1819.  He was the most prominent of the reformers prosecuted alongside radical speaker Henry Hunt and played an important role in organising their defence.  He very nearly succeeded, but after a furious outburst in court he was sentenced to a year in Lincoln gaol – the fifth prison he had been in for his political activity.  His later memoir, Passages in the Life of a Radical, is one of the best accounts we have of Regency England, described by the late great historian E P Thompson as ‘essential reading for any Englishman’.

Bamford was a skilled weaver – first cotton, later silk – from a Methodist family in the handloom weaving village of Middleton, six miles north of Manchester.  He suffered early tragedy, losing his mother and siblings to an outbreak of fever in a Manchester workhouse, where his father was for a time governor.  He enjoyed a robust outdoor youth, drinking, fighting, and fathering an illegitimate child, and also attended both Middleton and Manchester grammar schools.  He briefly joined the local volunteers during the Napoleonic invasion scare of 1803, but like many patriots he was disillusioned by the long drawn out privations of wartime.

When peace came after Waterloo and hopes for reform rose, Bamford became secretary of the Middleton Hampden Club – one of several such political campaigning and debating societies formed in England in the early 19th century.  He ended up as a delegate to London in January 1817 where he met the orator Henry Hunt, the writer and organiser John Cartwright, and the pamphleteer and journalist William Cobbett, and helped present a mass of reform petitions to parliament.  He stayed on to sample London’s radical underworld.  Peterloo brought Bamford to the brink of rebellion, but he was fundamentally a radical constitutionalist.  He consistently worked to build a broad based mass movement involving whole communities.  He led the way in encouraging women to vote at radical meetings, and later persuaded his wife Mima to add her own account of Peterloo to his memoir. 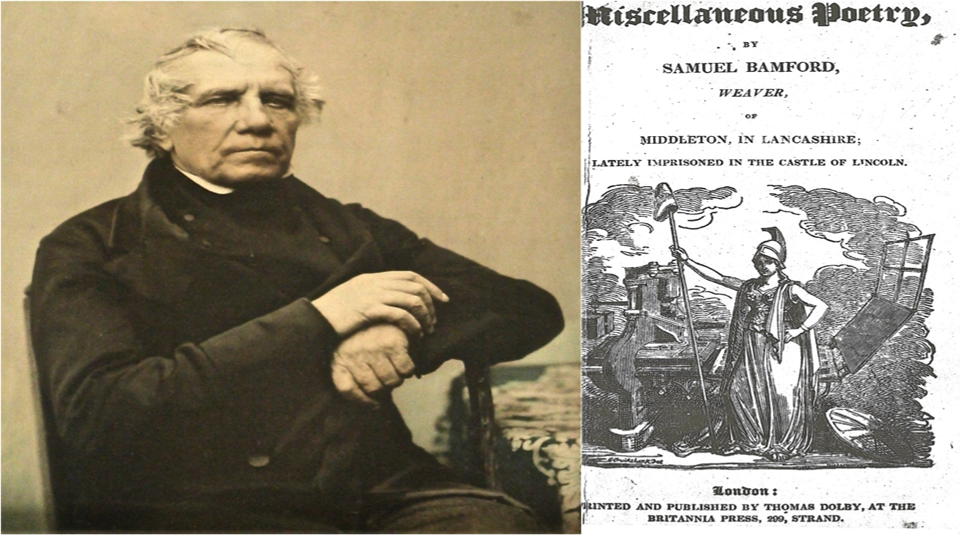 Bamford wrote and published many radical poems and songs, and his most rousing anthems were written from prison and sung en masse in his honour.  He went on to become a freelance journalist and a supporter of mechanics’ institutes and working class education.  His two part biography, Passages in the Life of a Radical and Early Days, published in the Chartist period of the 1830s and 1840s, was admired by prominent writers and politicians of the time, including Charles Dickens, Elizabeth Gaskell, Thomas Carlyle, George Eliot (pen name of Mary Ann Evans), and William Gladstone.  Bamford was a pioneer of Lancashire dialect writing, and he loved walking and writing about his native landscape.  The diaries which he wrote later in life are one of the richest sources we have for Victorian Manchester.

Bamford had his flaws and his feuds.  He fell out with fellow reformers and writers and opposed the Chartists, whom he felt had abandoned the politics of progress for the politics of class.  He even did his turn of duty as village constable.  A sharp detector of flaws in others, he could be vain, ungenerous, and prickly.  His judgment was warped by a lifelong fear of spies and informers, and the death of his only daughter in the prime of life hit him badly.  It was not easy to be a working class hero in a sharply divided society, chasing success while maintaining integrity and keeping the demons of the past at bay.

Taking the long view, Bamford rises above it all.  Alongside Hunt, he was one of the principal architects of a forceful yet non-violent mass movement for reform – standing ‘calm and resolute’ in poet Percy Bysshe Shelley’s words – looking forward to the civil society and pro-democracy movements of more recent times.  Above all there are his writings: memoirs, journalism, fiction, poetry, diaries, all clear-eyed and plainly written.  He was born on the eve of the French revolution, lived through the worst of times and the age of reform, and died peacefully in his bed aged 84 in 1872, the year the secret ballot was introduced.

He never lived to get the vote but he gets mine; all homage to Samuel Bamford, the radical.

Robert Poole is Professor of History at the University of Central Lancashire (UCLan), author of Peterloo: the English Uprising (2019), co-author of the graphic novel Peterloo: Witnesses to a Massacre (2019), and co-editor of The Diaries of Samuel Bamford (2000).  His biography of Bamford has been on its way for 20 years.

As a charity, People’s History Museum relies on the generous support of our visitors.  From just £30 per year you can Join the Radicals and, like Robert, help the museum continue to champion ideas worth fighting for.  Your support can help us engage more people with democracy, exploring its development in the past, present and future of Britain.  Find out how you can Join the Radicals and support People’s History Museum.

You can read Peterloo and Protest, a piece written by PHM’s Researcher Dr Shirin Hirsch about the events of 16 August 1819.

Find out about the life of Hugh Hornby Birley, the captain of the yeomanry at Peterloo and a portrait of him in the museum’s collection in a guest blog by author Jeff Kaye.

Read Dr Jonathan Spangler, Senior Lecturer in Early Modern European History at Manchester Metropolitan University’s guest blog, Small beginnings…with global impacts: Peterloo – describing how political activity on one side of the Channel influenced outcomes on the other in August 1819.

Look out for PHM’s next two blogs putting the spotlight on two early Peterloo treasures within the museum’s collection.