The trade unions of the Middle Ages

Back in 2020 we shone a light on a trade union banner from the Transport & General Workers’ Union (TGWU) that helped lead the campaign to stop the exploitation of illegal immigrants, following the tragic drowning of Chinese cockle pickers working for gangmasters at Morecambe Bay in 2004.

Here our friend Dr Claire Kennan, from the Department of History at Royal Holloway, University of London reveals the influence of unions stretching back to the Middle Ages.

The trade unions of the Middle Ages

How long have trade unions been around?

Here at People’s History Museum (PHM) is the oldest documented trade union banner in the world.  It was created for the Liverpool Tin Plate Workers in 1821 by William Dickson for a procession to celebrate the coronation of King George IV.  Although this banner is nearly 200 years old, the history of trade unions actually goes back much further than you may think.  The concept of a trade union, or a body of workers joining together to protect their own interests, has a long history stretching back to the Middle Ages.  These associations have always been problematic for successive governments and as early as 1549 it was made illegal for groups, ‘confederacies or conspiracies’ of workers to determine rates of pay or the amount of work to be done in a given time.[1]

The earliest examples of associations of working men and women, or guilds, come from the Anglo-Saxon period.  However, these guilds were generally concerned with collective worship and burial services, rather than regulating trade.[2]  Some craft focused guilds, however, did emerge during the 12th century in some English towns.[3]  By 1160 London had royally approved guilds of weavers and bakers, Oxford had guilds of weavers and shoemakers, while Winchester had guilds of weavers, and fullers.[4]  By the end of the 12th century a further seven towns had also founded officially recognised weavers’ guilds.[5]  But it is not until the 14th century onwards that we see the craft guilds emerging on a larger scale, often developing out of local parish guilds in densely populated urban centres.

What was the role of the first trade guilds?

These associations attempted to protect the employment of their members through controlling wages, working hours, the admission of apprentices and the standardisation of working practices, all while maintaining religious activities at their core.[6]

Ordinances from the Tailors at York guild highlight the importance of maintaining certain standards within a trade.  Each year on the feast of St James the Apostle four ‘good and loyal men’ were chosen to ‘search, oversee and examine the craft, and present any faults of its practitioners to the mayor of the said city’.[7]  The ordinance also details how masters of the craft could not poach apprentices and that when an apprentice had completed his training (usually a term of seven years) he was to be charged no more than 40d when setting up his first stall.  This equates to just over £100 today; it would take a skilled tradesman eight days to work to earn this much.  It was also clearly set out that master craftsmen could face a fine of 2s (about £60 today) if they did not pay their workers’ wages on time.[8]

Disputes over pay and conditions frequently arose and medieval craft guilds could often step in to settle these disagreements.  In Worcester master craftsmen were attempting to pay their servants ‘in kind’ rather than in cash, and so the guild ordained that ‘no labourer, or any other person of the said city, against his assent, will, or agreement, be compelled or charged to receive anything in chaffer [in kind] but in gold and silver’.[9]

What was the advantage of joining a trades guild?

Skilled workers in urban trades realised the potential of powerful organisations as an effective tool for gaining concessions from employers and for ensuring that those taken on had the proper training.[10]  Young people were usually apprenticed in their early teens, so many of the documents regarding apprenticeship were concerned with moral behavior and pastoral care. An apprenticeship indenture made at Bridgewater, a market town in Somerset, between John Davy (tanner) and his wife Joan and Michael Laleye of Ireland in 1424 highlights some of these points.  Laleye agreed to serve his master and mistress faithfully throughout the term of his apprenticeship, keeping their ‘secrets’, doing them no dishonor or damage and not wasting any of their goods.  In return John Davy and his wife promised to teach and instruct Laleye, provide him with food, clothing and shelter and pay him at the end of his apprenticeship.[11]

What did trade guilds offer their members?

In certain areas, workers grouped together in order to exclude ‘interlopers’ from their trades.  By the 1270s in Winchester, the dyers’ guild was responsible for examining the quality of woad (a type of dye made from yellow-flowered plant and used to colour the wool) brought into the city by foreign merchants and by 1423 and the London blacksmiths had implemented controls over who entered their trade.[12]  In Southampton the tailors, coopers, shoemakers and blacksmiths all took collective actions (sometimes multiple times) to reduce the competition from workers coming from Spain, Portugal, Germany and Flanders.[13]

Were there disputes between trade guilds and the authorities?

Since the late Middle Ages, there have been attempts to resist these associations of workers, and even break their power.[14]  The 1179-1180 judicial enquiry and the 1388-1389 nationwide guild enquiry, ordered by Richard II’s government, demonstrate the early concerns of those in government regarding associations of ordinary workers.  In 1179-1180, the main aim was to establish which associations had been formed with royal consent[15] and in 1388-1389 it was to discover exactly what these guilds were doing and how much wealth they had (in the aftermath of the 1381 Great Revolt the government was clearly wary of ordinary people meeting and coming together to improve their lot).

So while we may think of trade unions and their disputes with the government as a relatively modern phenomenon stemming from the Industrial Revolution, they were in fact in existence, in some form or other, from a much earlier date.

Dr Claire Kennan is Medieval Specialist and Education Lead for the Citizens 800 Project. 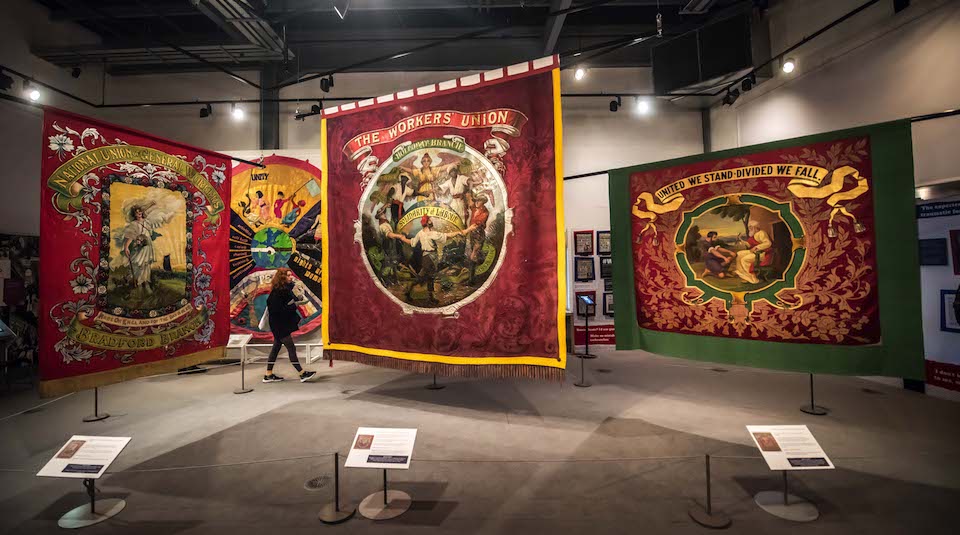 Until Sunday 8 January 2023
Visit 2022’s selection of historic and contemporary banners – the history and origins of trade unions is one of the strands that weaves its way through the exhibition, with PHM showing a very small part of what makes up the largest collection in the world; all specially conserved by the museum’s expert Conservation Team.

People’s History Museum is open five days a week, from 10.00am to 4.00pm.  The museum and its exhibitions are free to visit with a suggested donation of £5.  To find out about visiting the museum, its full exhibition and events programme visit phm.org.uk.

[4] Fullers removed all of the dirt and oil from sheep fleeces as part of the wool making process.