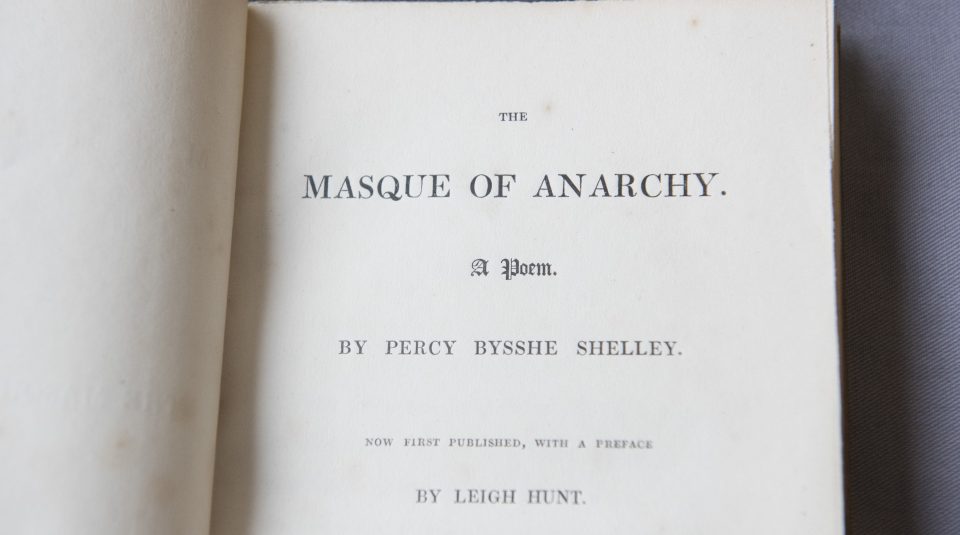 Many of the treasures on display for the very first time in PHM’s Disrupt? Peterloo and Protest exhibition were acquired thanks to a joint National Lottery Heritage Fund (NLHF) grant with Salford’s Working Class Movement Library (WCML).  To celebrate the opening of the Library’s Peterloo: news, fake news and paranoia exhibition, we asked Lynette Cawthra, Working Class Movement Library Manager to talk about the project which gave both institutions funds to go ….

‘Salford’s Working Class Movement Library (WCML) was delighted to be successful in 2014 jointly with the People’s History Museum (PHM) in getting a National Lottery Heritage Fund (NLHF) grant for a Collecting Cultures project.  This award gave both institutions five years of funding for new acquisitions, and created opportunities to encourage visitors to find out more about them.

The project, Voting for Change – 150 years of radical movements for democracy, 1819 to 1969, built on the complementary strengths of both organisations’ collections to acquire material related to movements and campaigns for the vote, from the build up to the Peterloo Massacre in 1819 to the lowering of the voting age in 1969 to 18 years old.  The focus of this project has been on the grassroots movements for political reform from which Britain’s successive extensions of the franchise may be traced.  The Library, which is free and open for everyone to use, has a distinctive perspective on the making of Britain’s democracy which is from the bottom up – its particular focus is on networks of activists and campaigners, from the early 1800s up to the present day.

At the core of the WCML collection is of course the written word, and as part of this project we have been thrilled to have been able to acquire at auction two great treasures.  The first is an original edition of Percy Bysshe Shelley’s poem The Masque of Anarchy, as featured on this blog in March 2019.

The second is linked to the fight for women’s suffrage and specifically to Sylvia Pankhurst.  Thanks to NLHF we are now the owners of a beautifully preserved volume of the weekly newspaper The Woman’s Dreadnought, covering March 1915 to March 1916.  Priced at a halfpenny The Woman’s Dreadnought, published by the East London Federation of the Suffragettes (ELFS) and edited by Sylvia Pankhurst, covered a wide range of topics of interest to working women.  The ELFS led community action to support those most affected by the sudden wave of unemployment in London’s East End caused by the start of World War I.  They organised the distribution of baby milk, opened restaurants serving nutritious food at cost price, and even started up a co-operative toy factory which paid a living wage and included a crèche.  Sylvia printed articles by very many campaigners in the feminist, socialist, anti-war and revolutionary movements of the time, and the authorities considered The Woman’s Dreadnought to be so dangerously radical that its offices were subject to several police raids.

Over the five years of the project we have been able to acquire many other noteworthy additions to WCML’s collection.  One of the earliest was a rare and most unusual archive of election material from 1835.  The material details the expenses of a Lincolnshire Conservative Party candidate, Thomas George Corbett, including amounts spent on alcohol, tobacco and wagons to get his voters to the hustings.

The Library is also now the proud owner of two volumes of cartoons by Francis Carruthers Gould dealing with the general elections of 1895 and 1900, when the two established parties were having to adjust to the need to appeal to working class male voters as a result of the 1867 and 1884 Reform Acts.   More visual appeal was provided by the acquisition of an artistic autograph album with a suffragette twist.

Alongside printed material, both political and creative including a novel from 1910 which adds a further cultural dimension to our women’s suffrage collections, the Library has been lucky enough to acquire several artefacts, such as a Votes for Women sash and several beautiful women’s suffrage badges.

These acquisitions helped set the scene for a group of students from St Ambrose Barlow Roman Catholic High School in Swinton, Salford who developed a performance, Forward, Sister Women! sharing creative reflections on the women’s suffrage movement in relation to contemporary female activism.

Other WCML Voting for Change project events have included:

Working on the project with PHM has been really interesting.  The Library has had a representative on PHM’s Acquisitions Panel, thereby developing insights into both the decision making processes of a larger organisation and into the huge range of material they get offered!  Volunteers and staff from both organisations have also travelled together on a research trip to Glasgow, visiting the Glasgow Women’s Library and the People’s Palace.  And we’ve been really grateful to get some specialist support from PHM’s superb Conservation Team, particularly in relation to a beautiful, but rather dilapidated, scrapbook of hand-coloured cartoons about the 1832 Reform Act.

Looking back, I’ve had my particular favourite items.  One is a fantastically ephemeral item, a single sheet showing the swearing in of a special constable in the run up to the big Chartist gathering on Kennington Common in London in 1848, as the authorities got jittery about the potential for major civil unrest.  The other is an exquisitely illustrated children’s book Votes for Catharine Susan and Me, by author and illustrator Kathleen Ainslie.  It’s not entirely clear which side Ainslie was on – is she mocking her wooden peg doll heroines as they join the struggle to win the franchise?  However, her decision to give women’s suffrage campaigning such prominence in a children’s picture book of around 1910 certainly makes this acquisition very distinctive indeed.

It’s been a great five years – and we still have six months of the project to go.  The Library is looking forward to opening our own Peterloo exhibition and displaying The Masque of Anarchy on Friday 31 May – Peterloo: news, fake news and paranoia, and there are exciting plans afoot to end the project with a finale event marking the bicentenary of Thomas Paine’s bones nearly arriving in Manchester.  Sign up to WCML’s fortnightly free e-bulletin if you’d like to be kept abreast of that extraordinary story.

If you want to see any of these new acquisitions, or just fancy popping in to find out more about the Library, you can find our opening hours and how to contact us on WCML’s website.’

PHM’s exhibition Disrupt? Peterloo and Protest, on show until Sunday 23 February 2020, tells the story of Peterloo through eight original Peterloo artefacts, which have been brought together for the very first time.  The objects include pieces from PHM’s collection, new acquisitions and pieces that are on loan from other organisations (including a book from WCML).  Five of the objects are on display thanks to the Collecting Cultures project from the National Lottery Heritage Fund.