From violent protest to attic safety: The Vietnam War and a Hampstead Labour Party banner 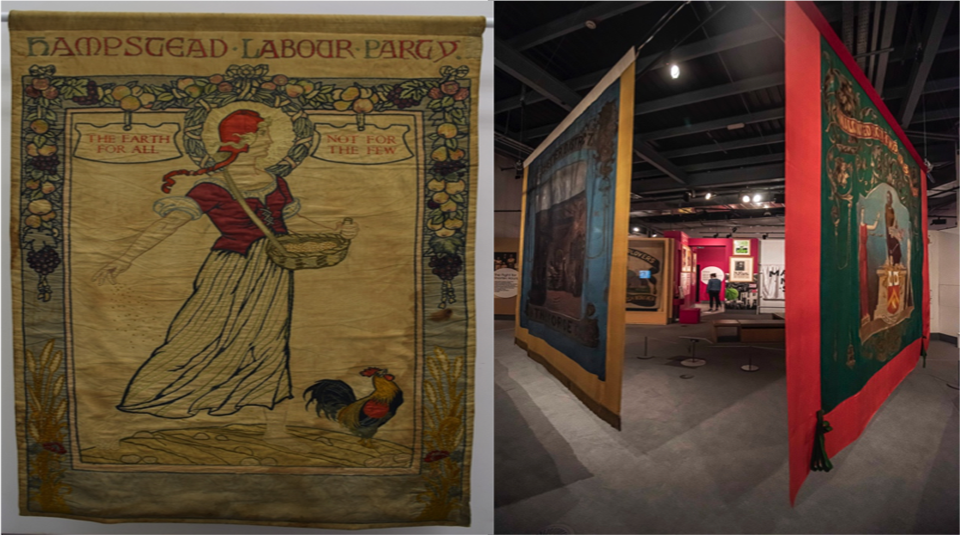 On the 65th anniversary of the outbreak of the Vietnam War, PHM’s Visitor Services Assistant Bob Dinn tells us about an Arts and Crafts banner in the 2020 – 2021 Banner Exhibition with a very interesting connection.

From violent protest to attic safety: The Vietnam War and a Hampstead Labour Party banner

What does the banner show?

Working in the galleries you develop favourite objects, and in PHM’s current banner exhibition the one I return to again and again is the Hampstead Labour Party banner, on display in Main Gallery One.  Dating from the early part of the 20th century, it is a stunning and unusual image, made all the more dramatic by being unfinished.  In its unfinished state the main figure and the surrounding details give the impression of almost emerging into focus in glorious shining gold, bronze, blue, green and purple.  The contrast between the vibrant colours and the stained backing cloth intensifies the banner’s impact.

The banner shows a barefooted woman, walking across a ploughed field, sowing corn from a basket.  She is accompanied by a cockerel and the main image is framed by a border of fruit and bunches of corn. 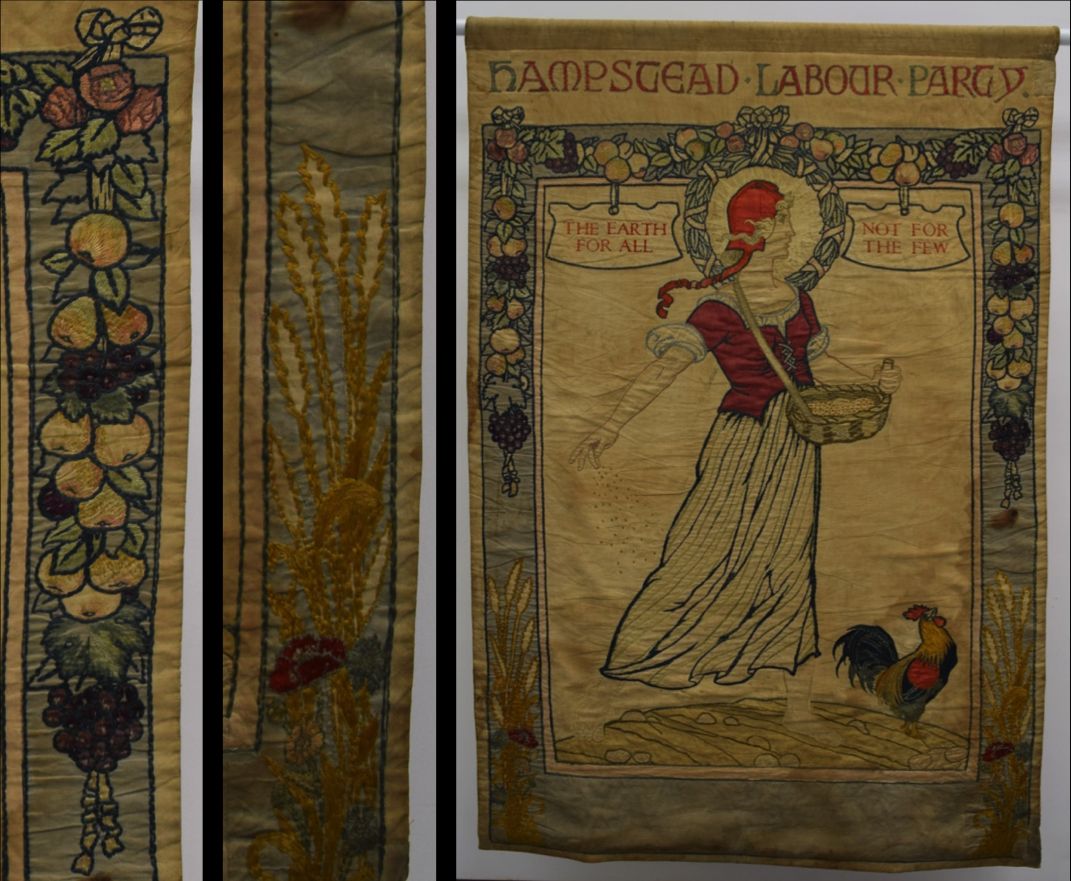 How was the banner made?  What artistic style was used?

Although the banner was probably homemade, whoever stitched it must have been very skilled at needlework.  The backing cloth is simple cream woven linen, showing water staining, and the border is made from blue linen.  The images and text are exquisitely embroidered with silk threads.

The composition and style were influenced by the Arts and Crafts movement.  Reacting to the dehumanising effects of industrialisation, the movement was established in 1887 to promote traditional artistic techniques and skills such as woodworking, embroidery and calligraphy.  Its members looked back to an idealised medieval world of greater simplicity and the main figure on the banner clearly shows this influence.  She is dressed like a traditional peasant and is sowing the corn in a way that was already long out of date in the early 20th century.  The text, picked out in red and green silk, uses a medieval style of calligraphy, found in the work of textile designer and writer William Morris.  The movement’s first president was Walter Crane, the Manchester based socialist artist whose self portrait hangs close to the banner.

What do the images on the banner mean?

Political banners were a form of visual propaganda, intended to be carried and seen, and they were designed with specific messages in mind.  The different images used by the artists of this banner show their skill, and also a deep understanding of the symbols and their political resonance.

The most direct message is in the text towards the top of the banner, an unambiguous political slogan – ‘The Earth For All Not For The Few’.  The focus of our attention is the woman, confidently walking across the field, scattering golden corn.  The pleats of her skirt, outlined in gold and blue, give a sense of movement, not unlike that found in ancient Greek and Roman sculpture, and this classical theme is continued in the laurel wreath of victory that surrounds her head like a halo.  Even her facial expression gives the impression of a classical goddess.  In her actions she is symbolically planting the seeds of the new world, a point reinforced by the shining sun behind her head.  The radiance of the new day is further shown by her companion, the cockerel – with his head tilted back in song he is literally announcing the dawn.  The detailed embroidery on the cockerel is remarkable, the overlapping feathers of its tail showing great artistry.  The woman also embodies ideas of fertility, both as a woman and through planting and producing food – the fruit and bunched corn in the borders, the rich produce of the earth; suggest plentiful food ‘for all not for the few’.

Given the date of the banner, and some other details of the woman’s representation, the imagery may also have a further hidden message.  She is wearing a cap of liberty; since the time of the French Revolution a symbol of political freedom, adopted by English radicals at Peterloo and other 19th century protests.  The banner’s date coincides with a time of great political change – in particular the enfranchisement of women, after a decades long struggle for the right to vote.  It is possible that this strong and confident female figure, with her laurel wreath of victory and cap of liberty, also represents the newly emancipated woman.

What do we know about the banner’s use?  What are its links to the Vietnam War?

Banners are made for both display and for marching with in processions.  Although we know little of the banner’s history, we can make some educated guesses.  The Hampstead Labour Party had many famous members.  Influential socialist economists Sidney and Beatrice Webb, whose desk can be seen on display next to the banner, were both members, as was the early 1980s Labour Party leader Michael Foot.  All may have marched with the banner at some point.  It is even possible that the Webbs were involved in its design and production as they were prominent members at that time.

The banner was donated to the museum by the family of Paul Segal, who during the 1950s was Chair of the Hampstead Labour Party, and it is here that the connection with the Vietnam War can be found.  Paul was married to the world famous psychoanalyst Hanna Segal, a former member of the Polish Socialist Party, and both were lifelong supporters of leftwing politics.  The banner’s last known political use was when it was carried at the protests against the Vietnam War in 1968 outside the US Embassy in Grosvenor Square, London.  The demonstration ended in violence, but the banner survived!  At some point after that it was folded up, put away in the Segals’ attic and forgotten about.  It is very exciting that it ended up in the museum’s collection and it will remain on display until January 2022.

Revamping a quarter of PHM’s main galleries, the majority of banners on display at the museum change annually.  Visit the current selection of historic and contemporary banners including the Hampstead Labour Party banner, all specially conserved by the museum’s expert Conservation Team.  The 2020 – 2021 Banner Exhibtion is part of PHM’s year long programme exploring migration, co-created by a Community Programme Team made up of people whose lives have been shaped by migration.

People’s History Museum is open six days a week, from 10.00am to 5.00pm, closed Mondays.  The museum and its exhibitions are free to visit with a suggested donation of £5.  To find out about visiting the museum, its full exhibitions and events programme visit the museum website’s home page.

Discover more about the Arts and Crafts movement and its links to environmentalism  through an online tour exploring the theme Hidden Nature for Heritage Open Days, with PHM Programme Officer Zofia Kufeldt.  Hear the stories of those who have campaigned for nature and the environment over the last 200 years.

Find out how the museum’s Programme Team created the Protest Lab space in 2019 and get an insight into contemporary objects of protest that were collected for display.

Writer and Editor of Haunt Manchester, Emily Oldfield, reviews the 2020 – 2021 Banner Exhibition in her blog, Hidden histories and powerful stories.