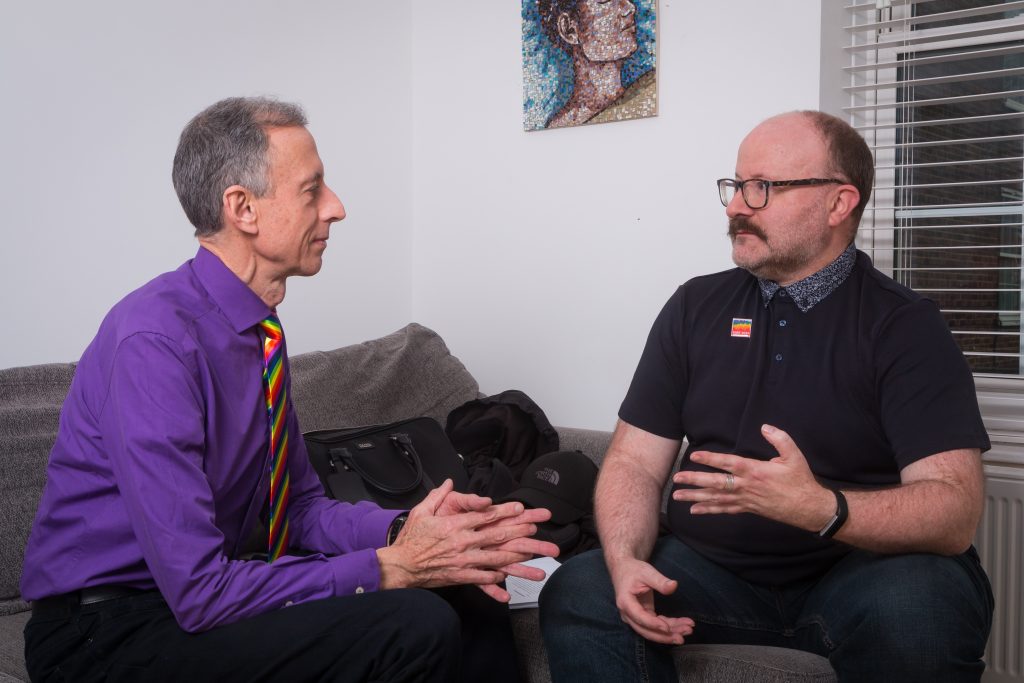 On Sunday 10 February 2019 People’s History Museum’s Playwright in Residence, Stephen M Hornby, will debut his play First Rumours with a rehearsed reading as part of OUTing the Past, the national festival for LGBT history.

The play looks at the life of Peter Tatchell, in particular when he stood as the Labour Party’s parliamentary candidate in the Bermondsey by-election of 1983.  This was a campaign that would go down in political history, notably for the homophobic abuse received by Tatchell.  Stephen’s play reflects on and examines these events, which for part of his research he used People’s History Museum’s archives where Tatchell’s papers and those of the Labour Party are held.

Peter Tatchell, renowned for his work as a human rights campaigner, says, “People’s History Museum is the national museum of democracy.  I’ve deposited some of my papers there and seen the excellent work they are doing.  I’m delighted that Stephen has been working with those papers, and done a series of interviews with me, to create a dramatisation of the story I told in my book The Battle for Bermondsey.  It was the most homophobic election campaign ever fought in Britain.  It’s time now for the full truth to be told.”

Peter Tatchell will be in attendance at the first rehearsed reading of First Rumours on Sunday 10 February 2019 (3.00pm – 4.20pm) at People’s History Museum.  Following the reading there will be a Q & A with Peter, facilitated by LGBT activist and historian, Paul Fairweather.

“I feel like I’ve only just got started on this project as the material is so rich and fascinating.  I could spend years on it.  What I’ll be presenting is an initial dramatic response to the interviews I’ve done and the research I’ve conducted.  It isn’t a completed play yet, more a starting point, a first sharing of ideas and characters to see how people respond, a work in progress.  I’m really looking forward to hearing what people make of it.”

Stephen’s position as Playwright in Residence at People’s History Museum has been made possible with the support of The University of Salford as part of the Arts and Humanities Research Council (AHRC) funded North West Consortium Doctoral Training Partnership (NWCDTP).

Stephen M Hornby’s plays shine new light on LGBT+ stories from history for modern audiences.  Stephen was previously one of the Community Curators for the award winning 2017 exhibition Never Going Underground: The Fight for LGBT+ Rights at People’s History Museum, which marked the 50th anniversary of the partial decriminalisation of homosexual acts in Britain.

First Rumours is part of People’s History Museum’s 2019 programme of activity that centres on the theme of protest; a highlight of which will be the museum’s headline exhibition Disrupt? Peterloo and Protest, which opens on Saturday 23 March 2019.  The exhibition commemorates the 200th anniversary of the Peterloo Massacre in Manchester and will feature objects from the museum’s unique collection, including original Peterloo artefacts.  A space within the exhibition will be a Protest Lab; an experimental gallery for individuals, communities and organisations to use for creative campaigning and collective action.

Peter Tatchell is one of People’s History Museum’s Radicals.  This membership scheme celebrates the people whose ideas have shaped our society, giving the opportunity for individuals or organisations to sponsor the Radical thinker of their choice to raise funds to support the national museum of democracy’s historical collections, exhibitions and Learning Programme.  For further information, visit: https://phm.org.uk/support-us/

Tickets for First Rumours are free, but must be booked in advance and donations are welcomed: https://phm.org.uk/events/outing-the-past-firstrumours/   Stephen M Hornby is blogging about his experience of being the museum’s Playwright in Residence, which can be read here: https://phm.org.uk/blogposts/phms-new-playwright-in-residence/

People’s History Museum is open seven days a week from 10.00am to 5.00pm, and is free to enter with a suggested donation of £5.  Radical Lates are the second Thursday each month, 10.00am to 8.00pm.  To find out about visiting, its events programme and for more information about becoming a Radical sponsor, visit phm.org.uk.

For further information or to arrange a visit / interviews please contact Fido PR:

People’s History Museum (PHM) in Manchester is the national museum of democracy, telling the story of its development in Britain: past, present, and future.  The museum provides opportunities for people of all ages to learn about, be inspired by and get involved in ideas worth fighting for; ideas such as equality, social justice, co-operation, and a fair world for all.  PHM offers a powerful programme with annual themes; 2019 sees a year of activities around protest movements to mark the 200th anniversary of the Peterloo Massacre, and the programme for 2020 will be on the theme of migration and identity.

The AHRC is part of UK Research and Innovation, a new body that works in partnership with universities, research organisations, businesses, charities and government to create an environment in which research and innovation can flourish.  The AHRC funds research and postgraduate training in collaboration with a number of partners.  The quality and range of research supported by this investment of public funds not only provides economic, social and cultural benefits to the UK, but contributes to the culture and welfare of societies globally.

About The University of Salford

We are the university aligned with industry – our work with global brands, SMEs and public bodies has put us in the top ten universities in the UK for consultancy.  We provide our students with real-world, industry-relevant experiences to prepare them for employment, providing employers with future-focused graduates who understand the needs of industry. The University has the highest student satisfaction rate in Greater Manchester, as evidenced in the National Student Survey results for 2018.  The University of Salford has over 20,000 students and 2,500 staff from around the world, with a global community of over 170,000 alumni.  We are continuing to invest in our campus and facilities with a £300 million masterplan that is already underway.  Visit http://www.salford.ac.uk for further information.

The North West Consortium Doctoral Training Partnership consists of seven Higher Education Institutions which offers postgraduate studentships, supervision, training and skills development across the full range of the AHRC’s disciplines.  It is one of 11 Doctoral Training Partnerships (DTPs) and seven Centres for Doctoral Training (CDTs) created for this purpose.  Specific aims include, promoting disciplinary capability and international research excellence required to underwrite the regional delivery of world-class PhD supervision and training in the arts and humanities.