From a march to a museum | Revisiting the 2017 Women's Marches 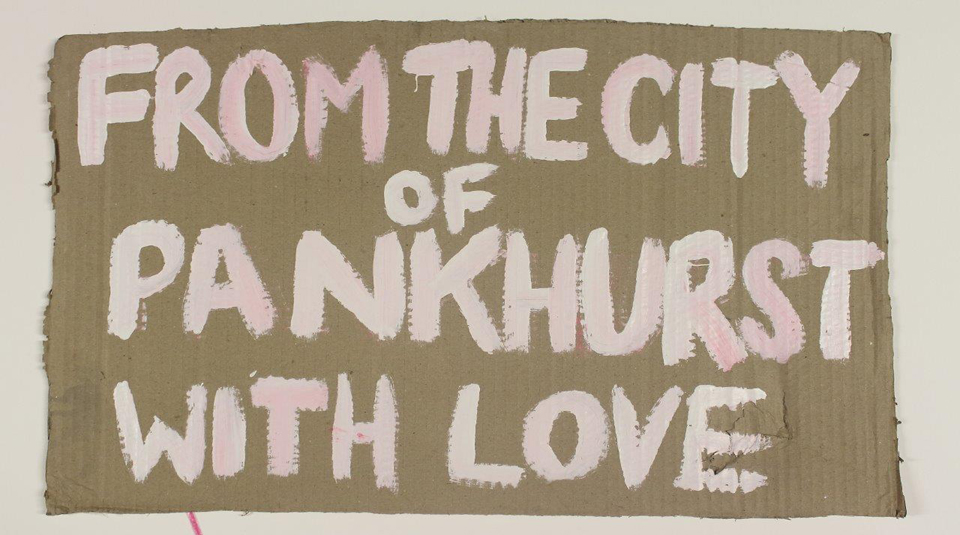 Incredibly it has been 5 years since Women’s Marches took place across the globe; described as one of the biggest human-rights demonstrations in history, with millions taking part and representation in every continent of the world.  Manchester was one of the cities that marched on 21 January 2017 and in this blog we hear the fascinating story of the From The City of Pankhurst With Love placard that began its life on this march.  This is the story behind the object in the words of its creator Caroline Dyer, Co-Director of Heard Storytelling and an Events Manager.

Five years on from the Women’s March in Manchester, what are your memories and reflections from that moment and time?

Waking up to the news of Trump’s presidential win I – like so many others – was confused and scared. My bubble (in which a win for a first female president, and feminism, would be by a landslide) had got it terribly wrong.  Just six months before I had been at a Bernie Sanders rally, believing in change and chortling at the idea that an orange buffoon could be president. And now this?!  We screamed our dismay into Twitter.

It just didn’t make sense.  Only a couple of weeks before voters went to the ballot box, a tape was released in which Trump bragged about grabbing a woman ‘by the pussy’ – and yet this did little to shake his supporters trust.  But really, should we be surprised?

Some of the vilest things my female friends and I have experienced were at the hands of men like Trump.  Narcissistic, arrogant, in positions of power and status. And each time something had happened there was bystander apathy – the colleagues who laughed at the rape jokes, the guy who had noticed his friend getting a ‘little handsy’ with that woman but hadn’t wanted to say anything, the friend you confided in who continued a friendship with your perpetrator.

Every time this apathy happened, I’d experience it as not being heard or seen.  It’s excruciating and incredibly isolating and so you learn to be quiet, and say nothing.  When America voted Trump, it felt like a whole country had sent a message to women; your pain isn’t significant enough, now be quiet.

But then something amazing happened; women around the world said ‘enough’. 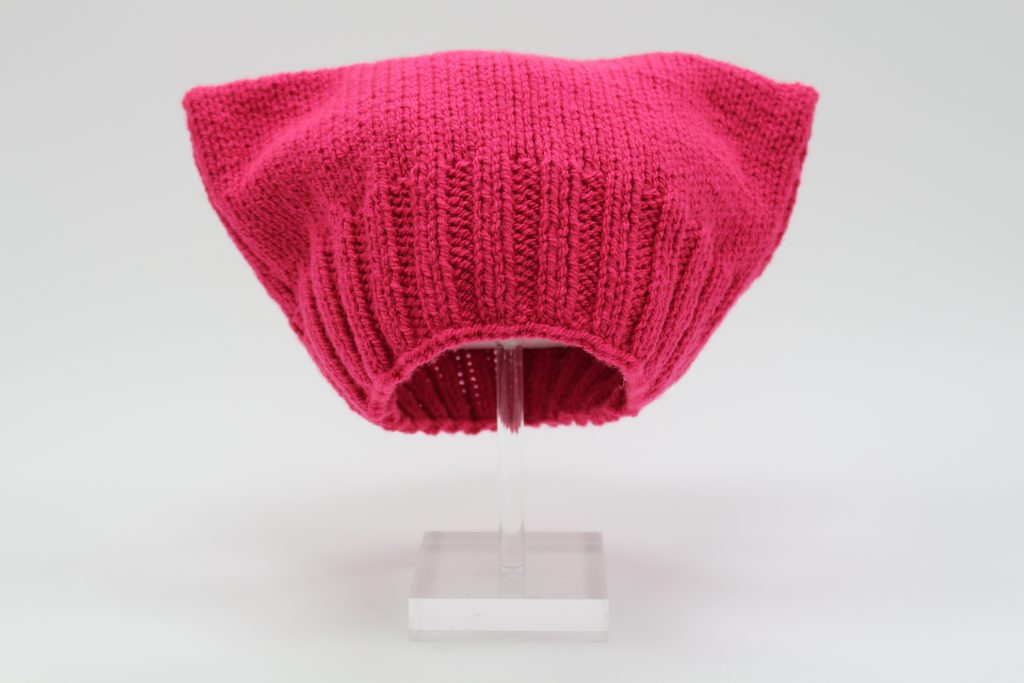 Nervous and stepping onto the tram en route to the Women’s March in Manchester (21 January 2017) I saw a mother and her two young daughters sat with their banners.  Emotion coursed through my body, my heart ached and I could feel my eyes watering up. At each tram stop, more and more women and girls got on the tram, armed with placards, chants, ribbons in suffragette colours.  Arriving at St Peter’s Square the atmosphere was electric – anger, pride, sorrow and hope – standing shoulder to shoulder with hundreds of people and millions around the world in empathy.  It seemed like we were all saying to each other, I see you and I believe you. You are not alone and we won’t be silent anymore.

And has there been a legacy for you from that day?

Years ago, I was sat with seven friends; six women and one man.  One by one my female friends and I shared stories of our experiences of sexual assault and harassment.  The male friend was shocked that each one of us had stories, and in some cases, multiple. I t’s important to note that our male friend would describe himself as a feminist, and even so, he had no idea quite how insidious sexual harassment is for women.

The Women’s Marches of 2017 broke a wall of silence providing a catalyst in the process of social change.  It led to movements such as Me Too and Time’s Up. Huge corporations addressed equality in the workplace, it inspired record amounts of women to run for office in the US, and millions more across the world to vote.  It encouraged open conversations amongst friends around gender equality.  It reignited our feminism and made it blaze in a social media age.

It felt so liberating to finally feel heard and to listen to other stories like mine, but Trump’s election made me realise how much I needed to learn from people outside my bubble.  And so, in 2017, I created Heard Storytelling with a friend.  We are a spoken stories company, which actively encourages the sharing of true stories to create positive change.  We harness the power of lived experience – told in people’s own words – to bring communities closer, make businesses better and ultimately deepen connections anywhere we can.

One of the most poignant moments running Heard Storytelling was following the kidnapping and murder of Sarah Everard, and the subsequent protests around gender-based violence.  Women approached us to record their stories of survival.  They wanted to take ownership and empowerment of their stories, to help heal their wounds, and by sharing, heal other people’s too.

It is our hope that through working with likeminded organisations, people and businesses we can help create real change.  It is my strong belief that first we must listen, and then take action.  Currently we are looking for funders to help support two Heard Storytelling projects in development; one is based on women’s experience of fear, and the other is to archive the stories of people from the LGBTQ+ community.  There are still so many injustices which go under the radar – our aim is to provide a platform for individuals to help bring them to the surface.  Their stories, told in their own words. 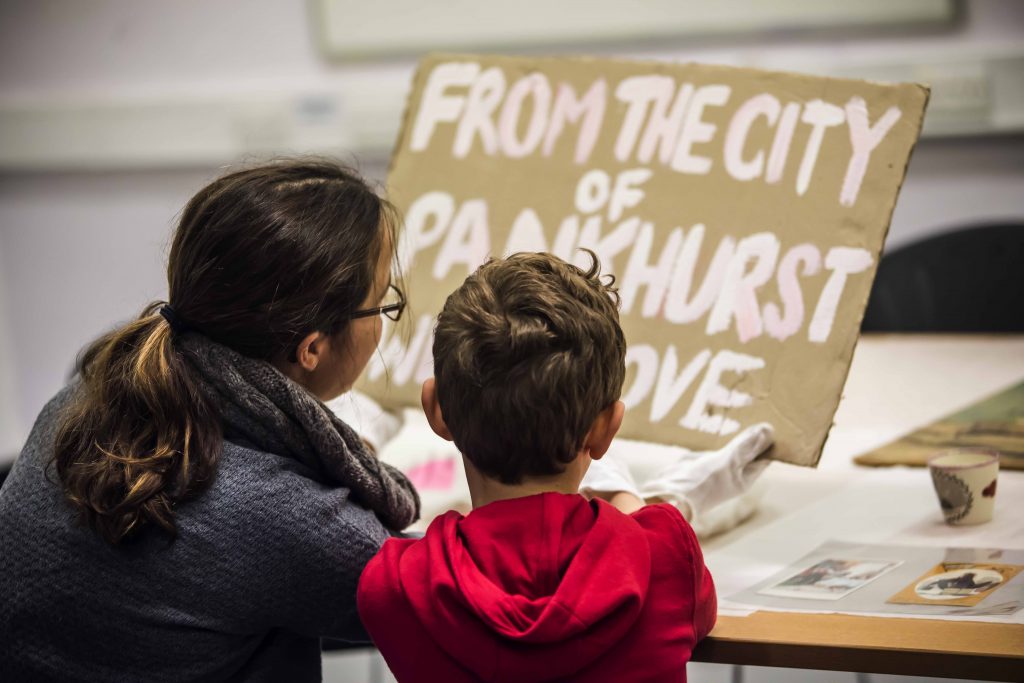 When you created the placard ‘From the City of Pankhurst With Love’, did you ever imagine that it would go on display in a museum and become part of its collection?  What does this mean to you?

With haste I scrawled ‘From The City Of Pankhurst With Love’ in my hallway paint pot samples across the back of some furniture packaging.  The meaning was twofold; a warning to men like Trump to not mess with the city that gave birth to women’s reform.  And also, to send a message of love to those who believe real change impossible – if Pankhurst could change the course of history for women, so could we.

Towards the end of the march, I gave my banner to someone walking next to me and forgot about it. 14 months later I was booking an event at People’s History Museum and I couldn’t believe what I saw… my placard was the main picture advertising the event.  I learnt it was to be displayed next to an original Suffragette banner, in an exhibition celebrating the centenary of the first women achieving the right to vote.  It was one of the few moments where I really realised that my opinions matter and that I count.

My friend and artist Charlotte Brown helped turn the placard into prints which were sold to raise money for MASH and the Pankhurst Trust.  It fills my heart to still get messages years later from people showing me their print in situ.  And when I look at my own copy, it reminds me to use my privileged position to be brave and act when I see or hear something which isn’t okay.  It is a lasting memory that I am not alone, and that we can create positive change together.

From The City of Pankhurst With Love placard 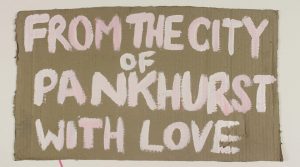 This placard was one of a number of objects that People’s History Museum (PHM) collected around the centenary of the first women achieving the vote, with the legislation passing on 6 February 1918.  It went on to be displayed as part of a groundbreaking exhibition at the museum Represent! Voices 100 Years On (2 June 2018 to 3 February 2019) and is now a part of its permanent collection, which means that it will be conserved and looked after by PHM’s world-renowned Conservation Team so that future generations can discover its story and moment in history. 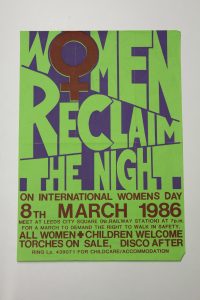 Caroline’s placard joins pieces like the Women Reclaim the Night (1986) poster.  This was created for a march that took place in Leeds on International Women’s Day on 8 March 1986.  The Reclaim the Night marches began in 1977 as part of the Women’s Liberation Movement and in response to police advice to women following the murders of several women in Leeds, Bradford and Manchester.  PHM’s ability to share stories about the fight for change and progress is made richer and more inspiring by having pieces such as these within its collection.

Contemporary collecting projects are an important part of PHM’s work as the national museum of democracy. Help from supporters can play a vital role in making these projects possible.  You can play your part by joining the Radicals.

Listen to former PHM Programme Officer and suffrage expert Helen Antrobus, in an episode from the 2018 podcast series exploring the crowdsourced exhibition Represent! Voices 100 Years On. In this episode, Helen particularly focusses on marching as a form of protest; from the 1913 Suffragist Pilgrimage for women’s voting rights to the 2017 worldwide protest the Women’s March protesting against the inauguration of USA President Donald Trump.

And for more inspiration, read Is this what democracy looks like? from former PHM Co-Chair and Trustee at People’s History Museum, Martin Carr.

Find out more about how the Nationality and Borders Bill will impact women seeking sanctuary, many of whom have experienced gender specific forms of persecution, in this blog from Bristol City of Sanctuary and join PHM in campaigning against the Bill.