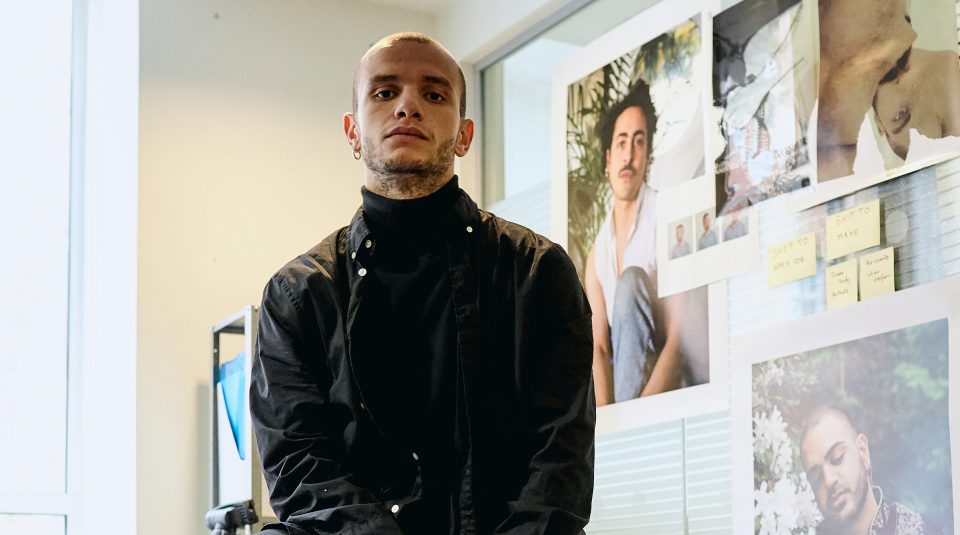 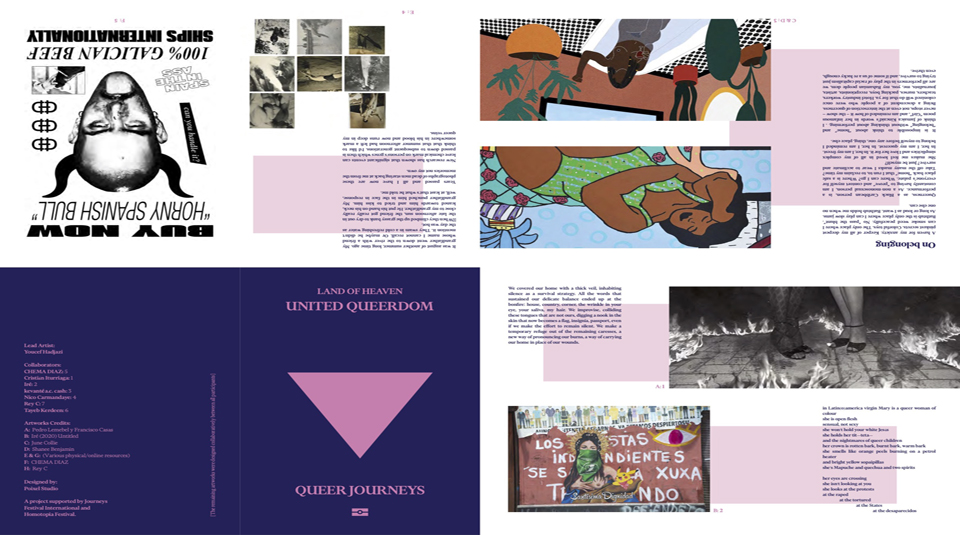 Artist Youcef Hadjazi’s work, Queer Journeys, reflects how he has used his own experiences to creatively and collaboratively explore queer migrant journeys.

Youcef is delivering a talk as part of this year’s OUTing the Past Festival to share both his personal story and that of Queer Journeys to raise awareness on LGBTQ+ immigration.  We caught up with Youcef to find out what we can expect from his talk and to hear more about his own very personal journey. 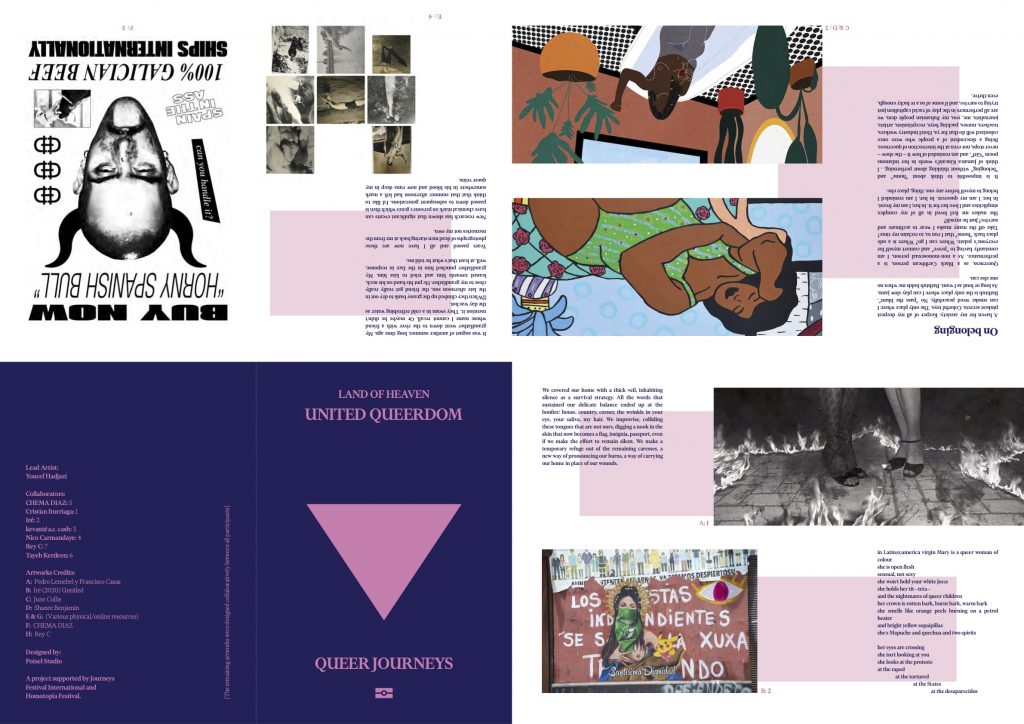 What is Queer Journeys?

Queer Journeys is a queer zine and outcome of a number of creative workshops that targeted LGBTQ+ migrants based in the UK; illustrating queer migrant journeys.  The aim of the project was to primarily initiate a safe and inclusive space for queer stories to exist within and to be initiated by their narrators, preserving authenticity and rawness while raising awareness on queerness, migration and difference.  Each workshop covered a certain theme that deconstructed notions of borders, nostalgia, visibility and resistance.  Supported by Homotopia and Journeys Festival International, the zine was exhibited on various online platforms and was featured in Journeys digital festival.

Could you please share some of your own story with us?

Being a queer person, a migrant from the age of eight and of Muslim background are all basepoints that almost dictate the way I artistically work, particularly on a project like Queer Journeys.  I arrived in the UK in 2013 from Kuwait, where I grew up, after (almost) fleeing Algeria with my family and its socioeconomic struggles.  Having come from two equally homophobic countries, I thought I could finally live my sexuality with less fear, prejudice and repression.  However, in parallel, I had forgotten I had arrived in a country, hypothetically, tens if not hundreds of years ahead of where I came from in terms of sexual tolerance, and hardly had any clue as to how I would initiate defining my sexuality and gender.

I was unaware of the internalised prejudice, the guilt, the shame, the internalised trauma that I was blind to.  I discovered gay scenes and forced myself into their template which I barely understood, a template that was scary yet familiar.  I was surrounded by hundreds of queers and felt one of the crowd, for once!  So I partied, for days, engaged in extreme hedonism, I tattooed my body, wore outrageous things, constructed and destroyed myself at the same time while thinking that was the way to be gay.  Until, I realised I was trying too hard to puzzle the complex definition of being queer.

Defining sexuality was an obstacle that I unlearned to fear, yet what I was obvious to was the fact my name was Youcef with a ‘c’, I grew curly hair, had a bit of an undefined accent and enjoyed eating pork.  I almost forgot I was different, racially and culturally, until the knife cut deeper.  Suddenly, I realised I had another obstacle to define and deal with.  I was a queer-conforming, beer-loving, curl-growing, not-so-Muslim-looking Muslim, which seemed an impossible equation to a lot of people.  I came from two different cultures people had barely heard of, or at least had a mainstream media-fed assumption about.  How do you hit two birds with a stone, when you were never taught how to throw?

Where did these experiences take you?

I spent years trying to deconstruct the link between the fear and familiarity I felt, the race and the sexuality, but more specifically; home and where I am, here and back there.  I kept on concluding that something was wrong with me and that each attempt I sought to connect the three worlds together, I failed at.  I had to find a coping mechanism to survive and tools to fight with, and saw that strength in people I could relate to.  So I reached out to spaces, circles, groups and collectives where we had those conversations and pushed the discourse further.  I understood that my weakness was probably a strength, with which I could not only fight prejudice but also be able to read myself. 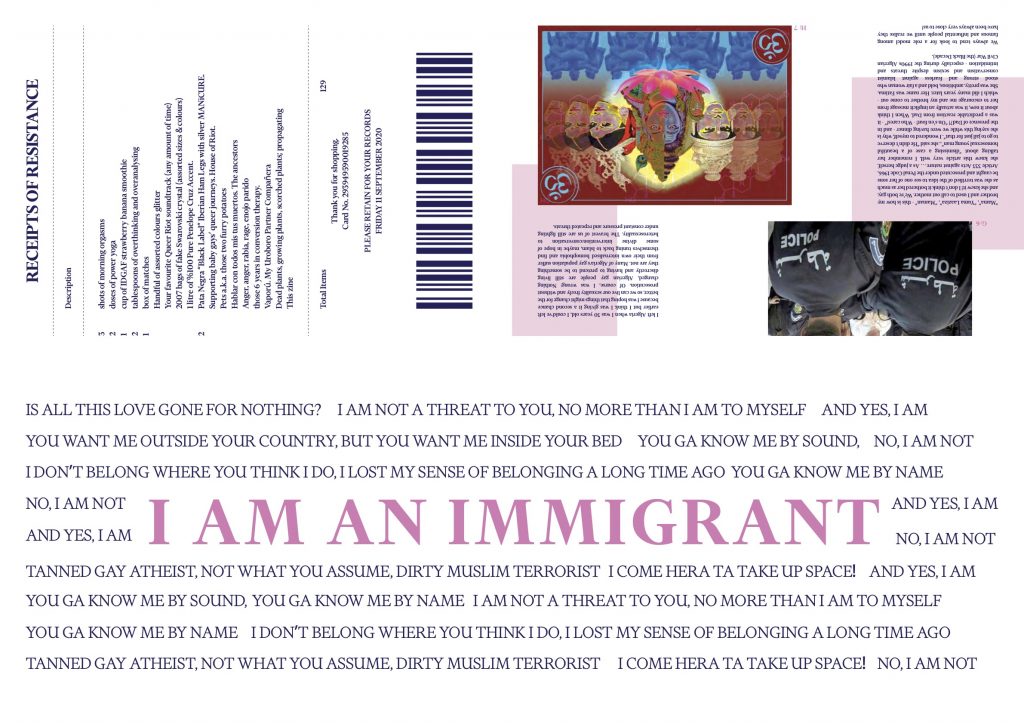 Queer Journeys was an outcome of the above, which I had reached through creating a space where those weaknesses and strengths were discussed in an intersectional way.  Participants were pushed to reflect upon themselves and see elements we relate to within a structure that opposes us.  Throughout the project I framed each workshop around a certain theme that relates to being a queer migrant.  For instance, one of my favourite workshops was ‘Belonging’ where we all worked individually and collaboratively to define ‘home’ and queering our thinking of ‘home’ as a notion.  Each participant was asked to think of the queerest thing from home that had a meaning to them alongside a short piece of text that contextualised the chosen visuals.  From sculptures, to mothers, artists, found graffiti to policemen, it was almost therapeutic to perceive ‘home’ from the queer perspective of each participant.

Among the five workshops, each studying a different theme, I, for a rare moment, felt part of a crowd again.  Participants were migrants from all corners of the world, each coming with a completely different cultural baggage and history.  Yet, we found commonalities in the smallest details and felt strongly connected, yet all we were connected to was an internet connection and a screen to which we spoke.  We opened up and shared collective knowledge while learning from our stories and traumas.  Through that, I learned more about my own experiences, yet in a way that made me, at least, feel less isolated in the most isolating of times.

Find out more about LGBT+ rights and migration:

Youcef Hadjazi will be talking as part of PHM’s Radical Late on Thursday 11 February (6.00pm to 8.30pm) in a programme celebrating LGBT+ histories for OUTing the Past Festival that also includes Migration, Race & Empire: LGBT+ histories tour with Maggy Moyo and Jenny White and Category Mistake by performance artist Mandla Rae.  The event is suitable for 18+ and bookable in advance via Eventbrite with donations welcome.

This event is part of a programme of events and exhibitions exploring migration.  And whilst the museum is closed you can also visit PHM’s 2020 – 2021 Banner Exhibition online.  The banners in the exhibition reflect past and present migration movements and the many challenges and opportunities that migration presents.

February is LGBT+ history month and the OUTing the Past Festival is taking place online this year.  There is a huge programme of events to explore from your home and online.

For families who want to explore equality and love, we’ve created a Doodle Den resource full of fun drawing activities, inspired by a banner in the collection, that promotes LGBT+ rights.

In summer 2021 the museum will be hosting an exhibition of photographs of LGBT+ families taken by Allie Crewe.  The photographs capture real family life from the LGBT+ parent community, bringing awareness of these lives and the ‘normality’ of everyday life.  Sign up to PHM’s e-newsletter for up to date information as we have it; and keep in touch through our social media channels: Twitter, Facebook and Instagram.